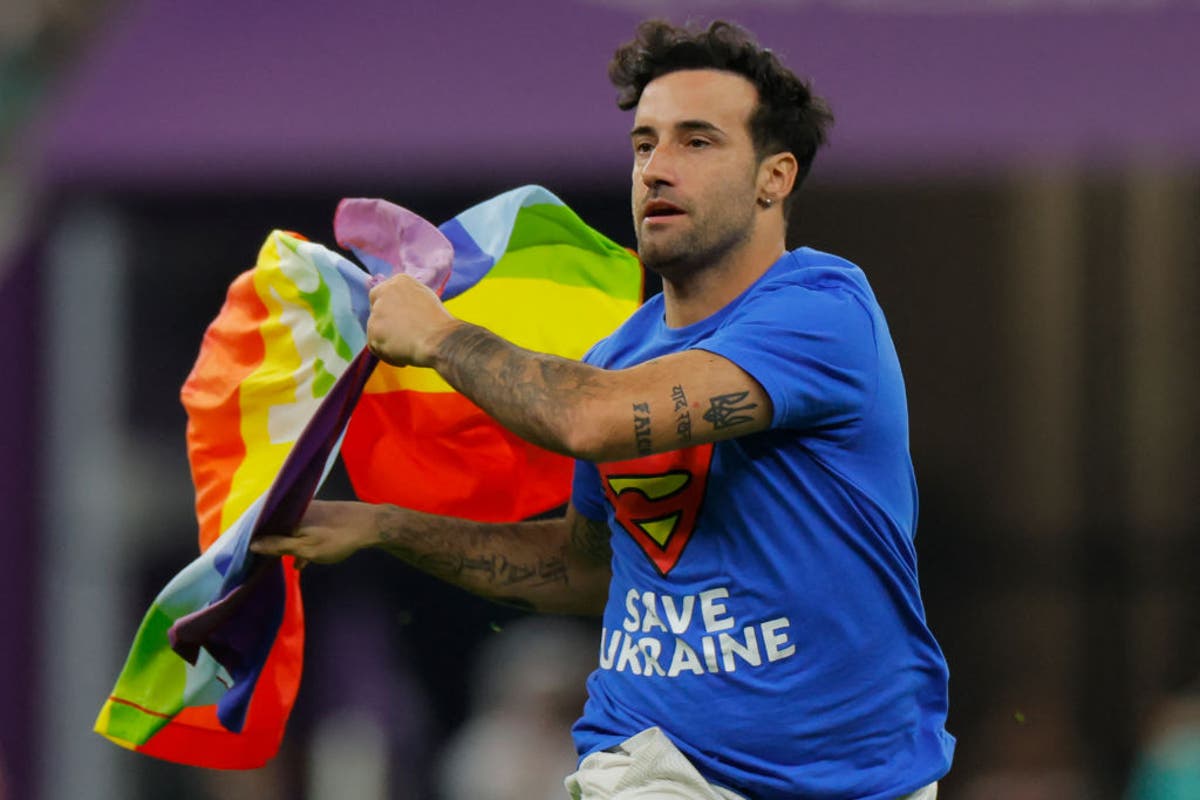 A pitch invader brought a rainbow flag onto the pitch at the Qatar World Cup match between Portugal and Uruguay at the Lusail Stadium.

As well as carrying the pride flag, the fan also wore a t-shirt with a superman logo and the message: “Save Ukraine”.

The back of the t-shirt had the message: “Respect for Iranian Women”, with three security guards manhandling the fan and removing him from the pitch within seconds of entering the field of play.

The World Cup has been hit by controversy throughout in Qatar, where homosexuality is illegal.

Fifa performed a u-turn over its stance to allow fans to wear rainbow items at stadia, as detailed by the Independent.

The colours have become one of the tense moments of the tournament, as so many players, officials and fans want to make a gesture of solidarity towards the LGBTQ+ community over Qatar’s laws and culture around homosexuality.

Some supporters and media have had items of clothing with rainbow flags confiscated, most notably with security even instructing that bucket hats should be removed.

With federations limited by how they could protest, Germany covered their mouths in statement before their match against Japan.

Germany maintain Fifa “denied us a voice”, adding: “We wanted to use our captain’s armband to take a stand for values that we hold in the Germany national team: diversity and mutual respect. Together with other nations, we wanted our voice to be heard.

“It wasn’t about making a political statement – human rights are non-negotiable. That should be taken for granted, but it still isn’t the case. That’s why this message is so important to us. Denying us the armband is the same as denying us a voice. We stand by our position.”

While the English FA insist they feared “unlimited liability” if they wore the OneLove armband, with chief executive Mark Bullingham telling ITV: They would take disciplinary action against any player that was wearing the armband on top of having a yellow card.

“We had a lot of meetings with Fifa over that period and on Saturday before the game we felt we’d reached an understanding where we would wear it,” added Bullingham. “We hadn’t got permission but we would face a fine for it.

“Unfortunately then, on the day of the game, they gave us 10 minutes’ notice – two hours before we were due to go to the game. They came here with five officials and they ran us through a scenario where, at a minimum, anyone wearing the armband would be booked and face disciplinary action on top of that.”