‘We’re like brothers and sisters’: Ukrainians and Russians unite in London to protest Putin’s war 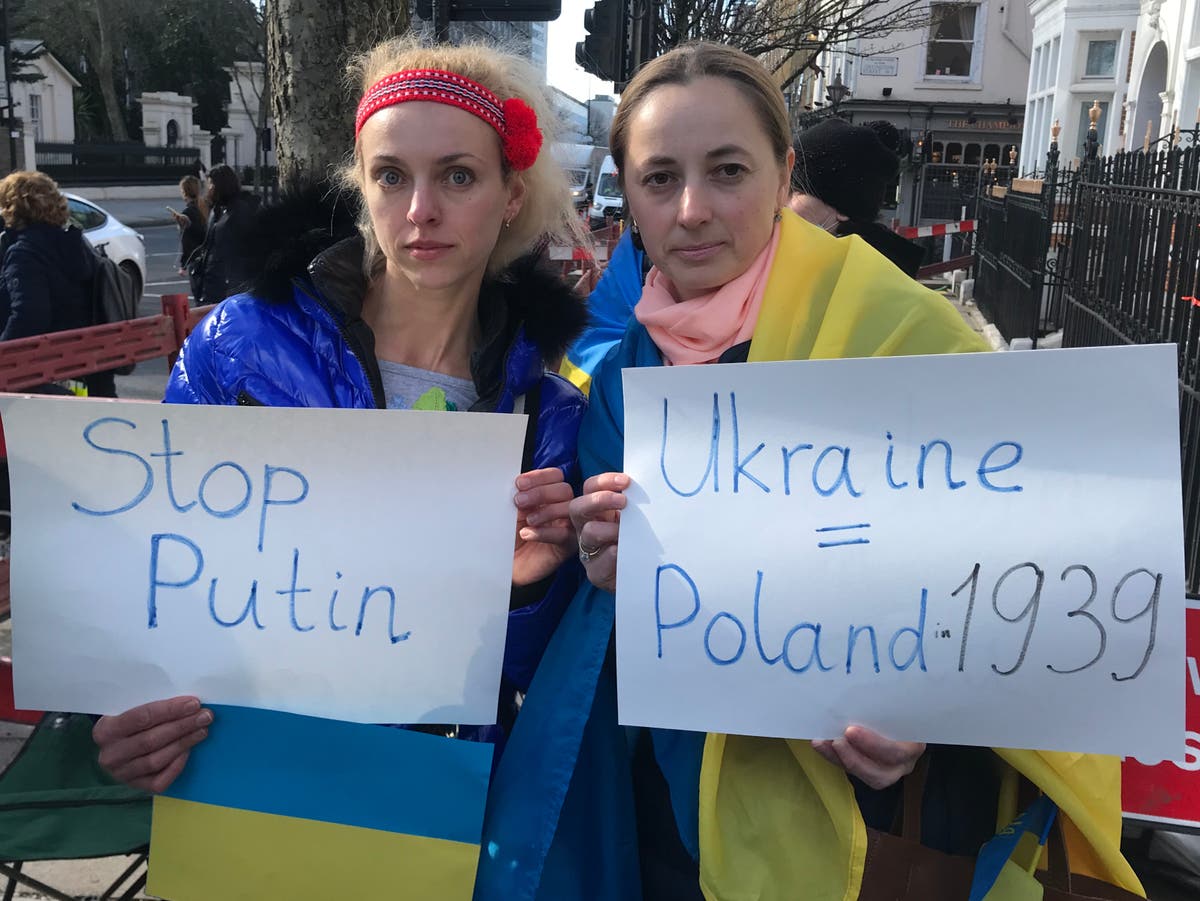 Russians and Ukrainians stood side-by-side in central London on Friday in solidarity against the war started by Vladimir Putin.

Thousands of miles from the fierce fighting, four Muscovites had taken up position beside two Ukrainian women outside the Russian embassy in the English capital.

Elena, who like her three Russian compatriots did not wish to give her surname, said she had come to show her support for Ukraine, adding that she was ashamed of the Kremlin.

“We’re like brothers and sisters. We’re all mixed and matched, having families on both sides of the border. It’s like shooting your own brother. How is this possible? It’s shocking,” she said.

Along with her friends, all of whom have lived in the UK for more than a decade, Elena was surprised that Mr Putin launched an all-out invasion on Thursday. She had assumed the months-long presence of Russian troops by the Ukrainian border was simply posturing to exact security concessions from the west.

“The attack is against all morality and humanity. It’s just unbelievable,” she said, the incredulity of her words matched by her voice’s pitch.

Ksenia, another member of the Russian diaspora, also expressed her dismay at the situation, a position she said was shared by everyone she knows. “I’ve got lots of friends in Russia and they’re all against it. They are heartbroken.”

Explaining the close connection between Russians and Ukrainians, Taisa, who is also from Moscow, said one of her grandfathers was Ukrainian. He died early in the Second World War fighting the Nazis.

Elena and Violet, the fourth member of the group, have similar ties to their country’s neighbour, as they each have one aunt living in central Ukraine. Both spoke of their growing concern for their relatives’ safety, as casualties mount and as Russian aerial strikes continue apace.

Given such familial overlap, Taisa was keen to spell out that many Russians object to Mr Putin’s actions. “It’s important to separate the Russian government from the people of Russia,” she said.

As proof of the unpopularity of the Kremlin’s aggression, she mentions the thousands of people who were arrested in Russia on Thursday for spilling out onto the streets in anti-war demonstrations.

Back in the UK, the wide-ranging repercussions of Mr Putin’s war have been felt by Taisa’s son, who was verbally abused at his English secondary school this week for being of Russian heritage.

“He’s shocked by what Putin has done and he’s devastated to be connected to him,” his mother said.

Taisa shared his thoughts, saying: “All Russians feel conflicted because we are ashamed. I feel guilty somehow, even though it’s an irrational feeling.”

Anastasia Ruleva, 23, a Russian from Volgograd who is studying at King’s College London, said she knew the feeling. “I feel personal responsibility that I’ve never felt before. I woke up today and I feel ashamed for being Russian.”

Anger was the overriding emotion for Lana Foster, 44, whose family are from the Urals. “It’s the worst thing that could happen to anybody, it’s war. People are dying and my country is doing it,” she said.

“The future is bleak. I’m not optimistic about the future,” Ms Foster added, noting how many Russians, including her mother, had been convinced by state propaganda that the invasion was justified.

As well as Ukrainians and Russians, other Europeans, including Polish and Lithuanian citizens, were present to rail against the war.

Klaudia Olender, an actor who has called London home for the past 10 years, said she might travel back to Poland, suggesting Mr Putin could have ambitions beyond Ukraine.

“This fight isn’t just for Ukraine, it’s for the whole world – for everyone who wants to defend independence,” she told The Independent.

Elena Juzulenaite, an artist from Lithuania, added: “Countries like Lithuania and Poland really knew from the beginning what was coming. We were always very vocal.

“The west just don’t understand the mentality of Russia and how dangerous they are. You cannot negotiate with people like that, who terrorise their neighbours.”

Standing close by, Olga Marchenko, who is from Chernihiv in northern Ukraine, was grateful for the presence of other Europeans at the protest.

But she acknowledged that Ukraine would have to fight by themselves. “All hopes for western military support have vanished,” she said.

Despite her worries for her relatives in Ukraine, the Russian language teacher, a British resident for 11 years, professed to being “optimistic” due to her country’s firm military resistance.

Her friend and fellow countrywoman Olga Kuts, who works in marketing, said the world was mostly united in condemning Mr Putin. “I’ve received so many messages of support from Belarussians and Russians I’ve only met once or twice.”