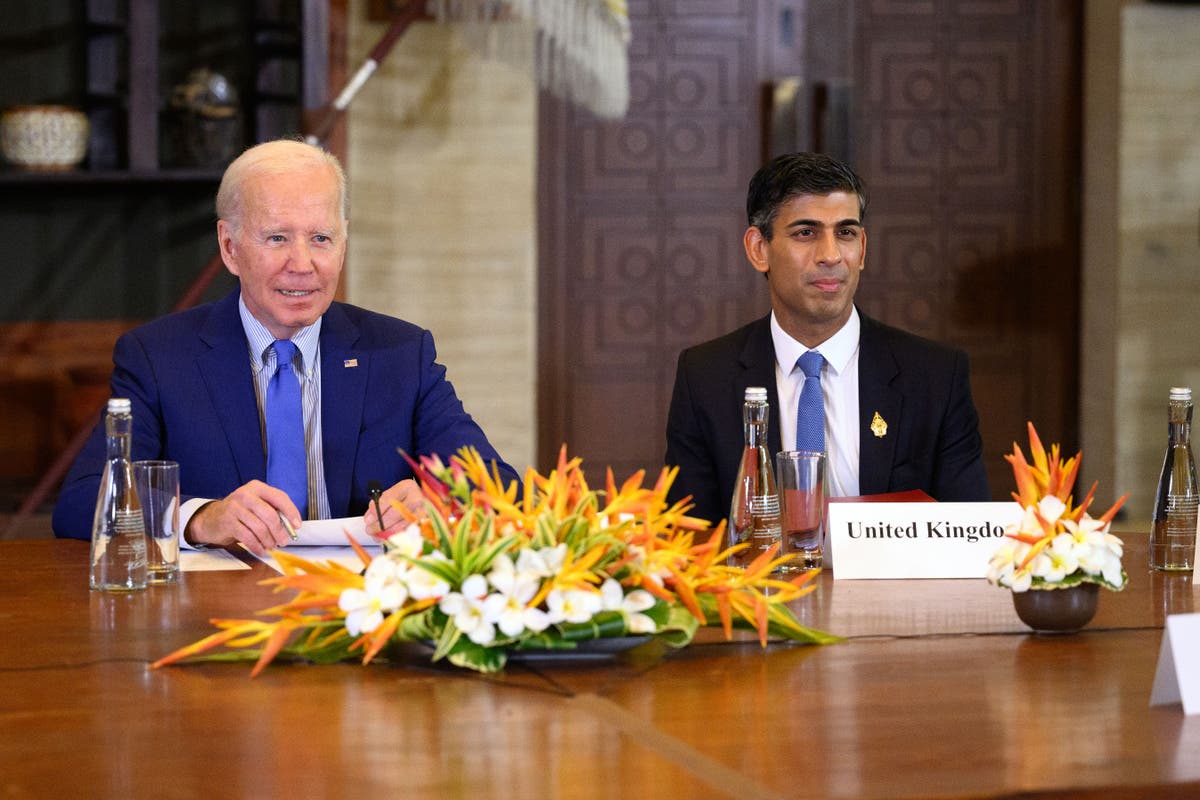 Rishi Sunak and Joe Biden have forged a new partnership aimed at cutting international dependence on Russian exports, as the US pledged to double the amount of gas it supplies to the UK.

The prime minister and president agreed to set up a special bilateral group led by top No 10 and White House officials to work together on energy security and affordability.

Washington will aim to export at least nine to 10 billion cubic metres of liquified natural gas to Britain’s terminals over the next year – more than double the amount exported in 2021 – as part of the agreement.

Mr Sunak hailed the new partnership, arguing that it would help bring down gas and electricity prices for Britons struggling with soaring energy bills.

The prime minister said: “Together the UK and US will ensure the global price of energy and the security of our national supply can never again be manipulated by the whims of a failing regime.”

He added: “This partnership will bring down prices for British consumers and help end Europe’s dependence on Russian energy once and for all.”

It follows a G7 deal on a price cap for Russian oil, as the West attempts to limit Moscow’s ability to finance its ongoing war on Ukraine.

It allows Russian oil to be shipped to third-party countries using G7 and EU tankers, insurance companies and credit institutions only if it is within the price cap.

Citing the war in Ukraine, the PM and president said in their joint statement that it is “more important than ever” for allies to work together to build “resilient international systems”.

The US-UK initiative has an “immediate goal” of stabilising energy markets around the world, while seeking to build support for accelerating the shift to renewable energy.

This will involve promoting nuclear energy as a “safe” and “reliable” part of the transition, as well as driving international investment in clean hydrogen energy, offshore wind and carbon capture.

The first meeting of the partnership’s joint action group will be held virtually on Thursday, but Mr Sunak and Mr Biden are not expected to attend.

It comes as Britain’s trade minister Greg Hands kicks off a tour of the US in a bid to boost trade ties state by state after Brexit.

Mr Hands will sign the UK’s third state-level “memorandum of understanding” with South Carolina after reaching deals with Indiana and North Carolina earlier this year.

While the government said it would create new opportunities for British businesses, the agreements are far less ambitious than the transatlantic free trade deal touted by Brexiteers as a major benefit of leaving the EU.

Mr Biden has previously expressed unease over the UK’s ongoing row with the EU over the Northern Ireland protocol, and the prospect of a trade deal did not come up in one-on-one talks with Mr Sunak at last month’s G20 summit in Bali.