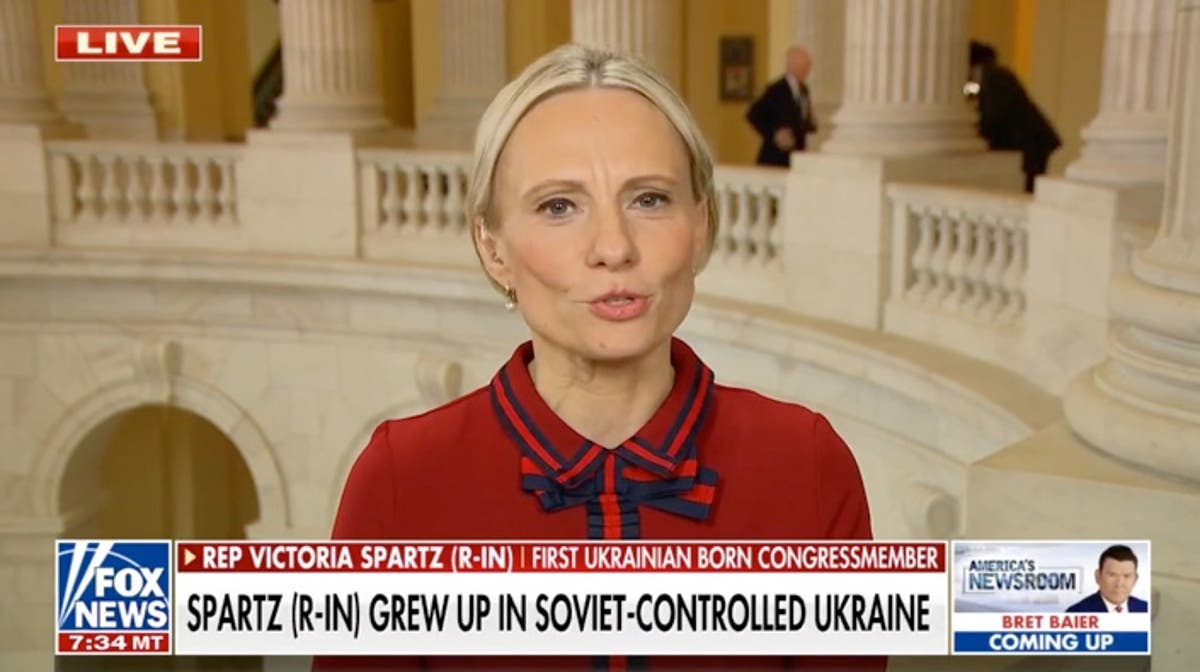 Ukrainian-born Rep Victoria Spartz has revealed that her 95-year-old grandmother was forced to take shelter in a basement after her neighbour’s home was bombed by Russian forces.

The Republican, who is the first Ukrainian-born lawmaker in US history, gave an emotional interview to Fox News on Thursday about the terrifying ordeal her family members are facing one week into Russia’s invasion.

On the very day that her elderly grandmother should be celebrating her 95th birthday, she narrowly escaped heavy shelling from Russian forces and had to take cover in the basement of her home in the northern city of Chernihiv.

“My grandma turns 95 today and we couldn’t reach her,” she said.

“My mom just called me a few minutes ago and told me that we reached her neighbour and the building next to her was hit so it blew out all of the windows in her apartment and so they moved into the basement.

“So at least now they are safe in the basement but this humanitarian crisis is going to reach a level never been seen before.”

Chernihiv was the focus of a horrific attack by Russian forces on Thursday, with at least 33 people killed and 18 injured by a series of missiles that rained down on residential buildings in the centre of the city.

Bodies of victims were seen being pulled from the rubble of two schools and apartment buildings.

The governor of the region Viacheslav Chaus said that the attacks only struck residential areas.

“There are no military facilities nearby. Nearby are hospitals, several schools and kindergartens, dozens of high-rise buildings,” he said.

Rep Spartz said that Russian forces are continuing to target innocent civilians across many parts of Ukraine and called for the US and other nations to take more “responsibility” for ensuring residents can be evacuated out of areas to safety.

“I was just listening to the mayor of Mariupol saying they hit directly buildings, blood banks, schools, water towers, electric facilities,” she said.

“They have nothing. People in the basement with no food, no electricity, nothing.”

She said she had spoken with a friend who has relatives near Kyiv who are “on the ground crying, they are cut off from everything”.

“They tried to talk to Russians to have safe passage – they didn’t do it,” she said.

“They actually bombed train stations and train cars to make sure people cannot get evacuated.”

The congresswoman said “we have a responsibility” to set up “safe corridors” to help with the evacuation of civilians out of Ukraine and called on the US to do more to stop the “extermination” of Ukrainians.

“I’m glad that Great Britain, Poland and a lot of European countries have been taking a lot of leadership. And I really want to thank them. They’ve been great allies for us, and it’s very important, but we need to help them,” she said.

“We can have more pressure for things happen[ing] because people need to have responsibility for the genocide, for killing people, for war crimes. It’s not a war, it’s killing, extermination of people.”

At least one million refugees have evacuated Ukraine since Russia launched a full-scale invasion on the country one week ago.

But in several cities in the north of the country, an unknown number of Ukrainians are struggling to find a way out.

Following talks on Thursday, Ukraine and Russia reached an agreement to set up humanitarian corridors to help civilians evacuate cities and areas under attack.

Ukrainian presidential adviser Mykhailo Podolyak said that they were working on arranging cease fires for the duration of evacuations from certain locations and on delivering medicines and food to places in need.

KMU : Operational situation on the diplomatic front as of 19:00 on March 3 regarding the Russian invasion