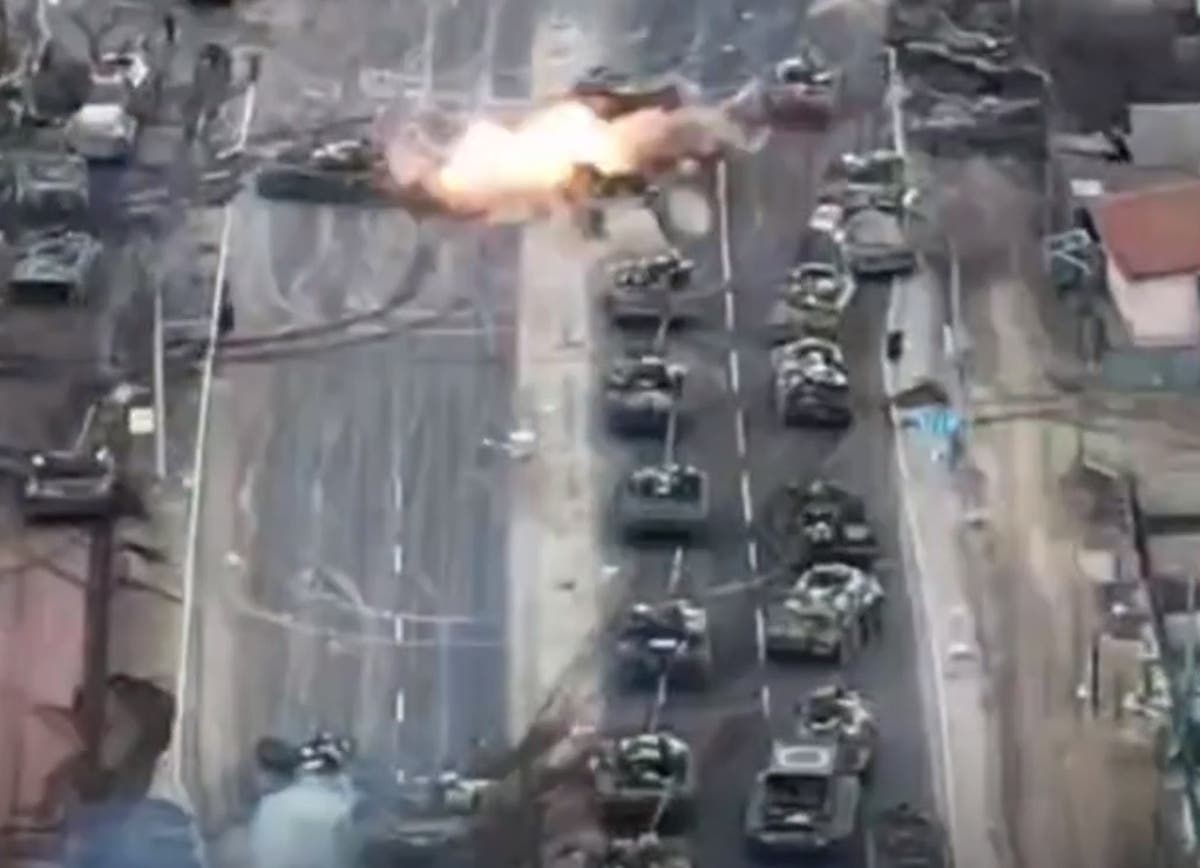 Ukrainian forces have claimed to have killed a top Russian commander in an ambush on tanks that they forced into retreat outside Kyiv.

Footage showed a column of Russian tanks ambushed in the town of Brovary, on the northeastern outskirts of the capital.

A number of explosions are seen when the tanks are hit in the residential area. Shots show cleared streets after the tanks leave.

The Ukrainian troops claimed that Colonel Andrei Zakharov was killed, but this has not been independently verified.

Some of the tanks were forced to retreat in the face of the destruction caused amid the ongoing Russian invasion, Ukraine said.

Russian troops had to “move to the defence” as a result of losses of personnel and equipment, according to Ukrainian defence intelligence quoted by Interfax-Ukraine news agency.

It added: “In particular, the commander of the regiment, Colonel A. Zakharov, was liquidated.”

At least five other Russian commanders have been killed since the invasion was launched two weeks ago, Ukraine has claimed.

The UK Ministry of Defence (MoD) said that Russia was facing “continued losses”.

Vladimir Putin could be forced to draw from “other sources” of fighters, the MoD said, because of dwindling manpower as a result of the high number of casualties within his army’s ranks.

He could also resort to hiring mercenaries from the Wagner Group, it has previously been reported, as troops from ally Belarus are reportedly refusing to go into combat.

Putin’s forces have so far failed to capture Kyiv since launching the invasion on 24 February, and have continued their heavy bombardment of many towns and cities.

On Wednesday, in the Black Sea port city of Mariupol, three people including a child were killed when a maternity hospital was bombed during, what was meant to be, a ceasefire – according to Ukrainian officials.

The attack drew fierce condemnation from leaders around the world, with Ukrainian president Volodymyr Zelensky describing it as a “war crime” and his British counterpart Boris Johnson said it was “barbaric”.

Mariupol is surrounded by Russian forces who are besieging the city, but is still in Ukrainian hands, Ukrainian officials said.

Mr Zelensky warned Russian leaders that the Kremlin’s invasion of Ukraine will backfire and make Russian citizens hate them.

He said in a video released on Thursday: “You will definitely be prosecuted for complicity in war crimes.”

Russians will also feel the consequences of harsh economic sanctions imposed by the West on individuals and entities.

Mr Zelensky said: “And then, it will definitely happen, you will be hated by Russian citizens – everyone you have been deceiving constantly, daily, for many years in a row, when they feel the consequences of your lies in their wallets, in their shrinking possibilities, in the stolen future of Russian children.”

Meanwhile, Putin said the sanctions were illegimate and Russia would solve the problems posed by them in “a calm fashion”.

Addressing a government meeting, he also said Moscow – a major energy producer which supplies a third of Europe’s gas – would continue to meet its contractual obligations.

Speaking at the same meeting, finance minister Anton Siluanov said the West had defaulted on its obligations to Russia by freezing its gold and foreign currency reserves.