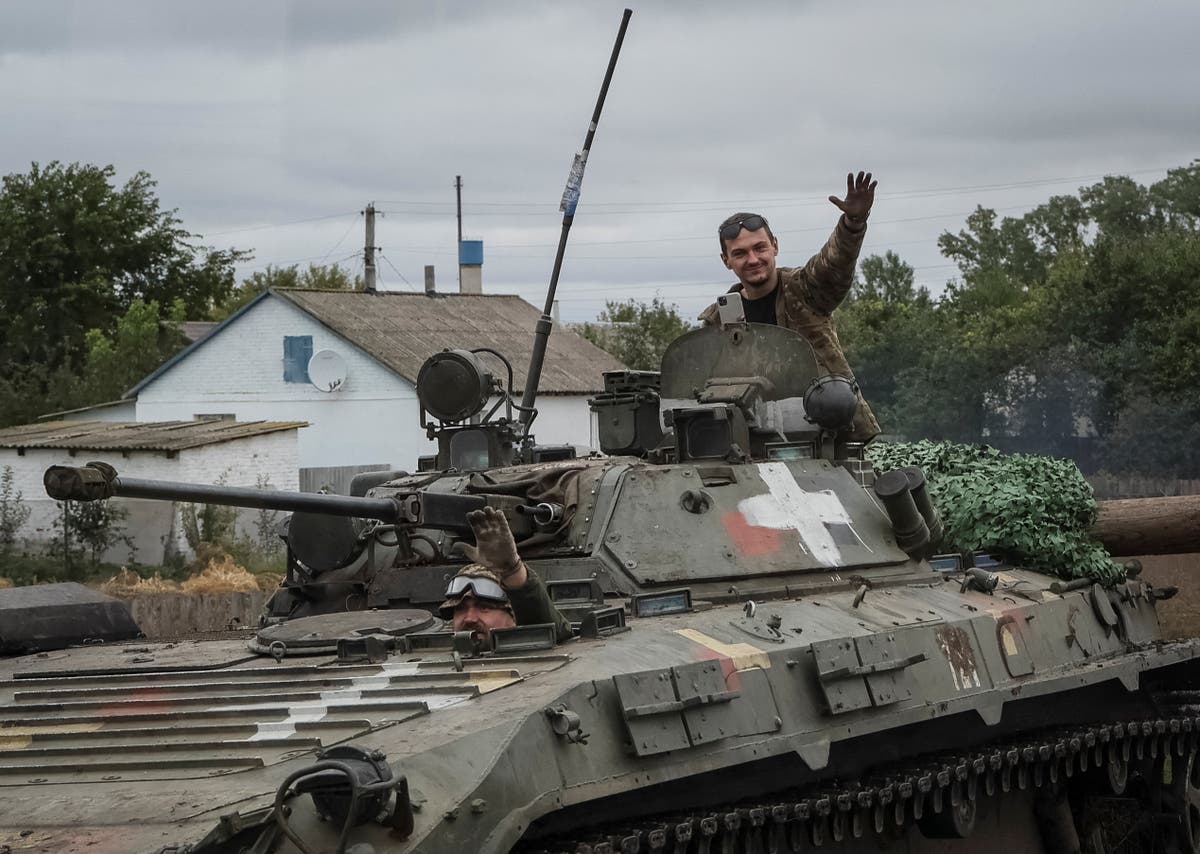 Some of the Russian forces driven out of Ukraine’s Kharkiv region have fled back across the border, although the elite tank regiment tasked to carry out first strike against Nato and defend Moscow has stopped itts retreat at Donetsk. The Kremlin’s main stronghold in the northwest has fallen, the route to Donbas reclaimed by Ukraine.

The Russian troops left in the eastern and southern front in Ukraine are battered, “degraded” in military parlance, and morale is low. The sweeping gains made by Ukrainian forces have led to more than 6,000 square kilometres (2,300 square miles) of territory being recovered in 12 days – four times the size of Greater London or bigger than Denmark, according to various comparisons.

The time and tide of the conflict is changing and the beginning of the end may now be here. Volodymyr Zelensky’s government has urged the West to speed up arms supplies to maintain the momentum of its offensives. American officials also said there were ongoing discussions on whether to provide Kyiv with warplanes, although this would not take place in the immediate future.

Nato has committed more than $8 billion (£6.9bn) in military equipment for Ukraine, with $4.6bn coming from the US. Senior Western officials attending a conference in Kyiv at the weekend confirmed that several Nato governments are in talks with manufacturers to increase production.

The arrival of equipment such as High Mobility Artillery Rocket System (HIMAR) and Multiple Launch Rocket System (MLRS) weapons has undoubtedly changed the battlespace, halting the seemingly inexorable Russian advance in the Donbas in the east.

However, even with more advanced weaponry it is not going to be quick, and the next phase of clawing back occupied land is going to continue to be bloody and bitter, and not necessarily one way traffic.

Three months ago, as Ukrainian troops entered newly-liberated towns and villages around Kharkiv following months of pounding, the mood was understandably ebullient.

One unit was sent pictures from comrades who had reached the Russian border, and the images spread through social media. There was similar excitement on Monday as the Ukrainian government announced some of its forces had reached the northeastern border with Russia.

Colonel General Oleksandr Syrskyi, commander of Ukraine’s land forces, cautioned three months ago against over-optimism. Russian attacks in some of the freed villages, while we were there, showed they had not gone that far away. They subsequently came back to within artillery range of Kharkiv and started shelling the city again.

Last week Colonel General Syrskyi was in the town of Balakliya which had been recaptured. As the Ukrainian flag was being raised on the main square he said: “Today we are completing the liberation of Balakliya, the first big city in our offensive. I’m sure it’ll not be the last city. Ahead of us are Kupiansk, Izium and many others.”

Within days, Kupiansk, a key point in Russian supply route where a number of railway lines meet, was captured, followed by Izium, the main Russian military stronghold in that frontline straddling the road to the Donbas.

The Colonel General – an old Soviet rank abolished by Ukraine with an exception made for Syrskyi – is said to be much more confident this time that the Russians would not be able get back into the Kharkiv oblast.

Captain Nicolai, serving in a mounted infantry regiment, had taken part in the last Kharkiv counter-offensive. There were differences this time, he felt. “We found that more and more from the the Donetsk and Luhansk separatist republics (DNR and LNR) and fewer Russians and they were as badly trained and armed as usual” he said.

“We captured quite a few and they were in a sad state. Some of them said they had been dragged from streets, from shops, to fight. Whatever the truth of that, they didn’t want to be here.”

A fellow officer, Lieutenant Oleksei, added: “Overall, there were fewer of them. We found in certain positions they were masking the numbers trying to show that there were more there than was the case. When we captured positions we found they were not lacking weapons, ammunitions, but fewer soldiers than we expected.”

A senior Russian-appointed official in Kharkiv oblast, Vitaly Ganchev, said that Ukrainian forces outnumbered the Russians eight to one during the counter-offensive. Ukrainian officials deny the difference was so large, but acknowledged that Russians have moved sizeable numbers to the south in response to another Ukrainian offensive towards the city of Kherson.

Some Ukrainian officials, and Western ones by proxy, have claimed that the Kherson “operation” has been a ruse to fool the Russians, while the one aimed at Izium from Kharkiv was always the real deal.

This, however, appears to be an attempt to exploit the factor of Russian unpreparedness to the full. “Never let a Russian crisis go to waste”, said an official in the presidential administration. “There is a lot of dissatisfaction among the Russian military about what’s happening. Lack of organisation, lack of intelligence, we are trying to make use of that.”

Kherson is very much a real operation, but progress has been slow for the Ukrainians on that front. The media, both Ukrainian and international, are being kept away from the frontline by the government, so it has difficult to gage the state of play independently. But the signs of discord back in Russia relating to what is unfolding in Ukraine are certainly on the rise and more in the open.

A Ukrainian pro-Moscow blogger Yury Podolyaka, who has 2.2 million followers on Telegram, said: “We need to be honest, the Ukrainian command has outplayed us here”. He warned of a “most serious combat defeat” unless the Kremlin manages to “ stop the Ukrainian breakthrough.”

A Russian military blogger, Maksim Fomin, declared that Russian forces have been beaten. “The situation is very difficult. Let’s exhale and say that we have been defeated”, he said. Fomin demanded an investigation into why the Russian forces were seemingly unprepared for the Ukrainian offensive leading to the debacle.

What must worry the Kremlin is that Ramzan Kadyrov, a staunch ally, has now turned his guns on the Russian leadership over the debacle. The Chechen leader, thousands of whose troops have been fighting in Ukraine, said the “ real situation” on the ground is “astounding” and has accused the military command of making major mistakes.

The Russian mercenary company, the Wagner Group, run by the oligarch Yevgeny Prigozhin, another ally of Vladimir Putin, has also deployed to Ukraine. Their numbers have grown as the Russian military struggled to replace the increasing toll of dead and injured.

Prigozhin was made a Hero of the Russian Federation military commanders were being dismissed and replaced after perceived failures in the conflict and Moscow began to rely even more on the private security company along with the Chechens.

Wagner, too, has been taking casualties. Last month the Ukrainians hit the Group’s forward base in Popasna, killing a large number of fighters, using American HIMARs and there are reports that it is having difficulties in getting numbers for Ukraine.

A former Wagner contractor, who had deployed to Syria and Libya, said that friends serving in Ukraine have been telling him that it was only a matter of time before Russian defences were breached.

“It’s common knowledge that the situation is very poor, there and a lot of people don’t want to go. I was told of all kinds of problems, lack of coordination, planning, untrained soldiers who were dangers to everyone else. I thought about Ukraine, went to have a look in Donetsk, but didn’t go at the end and certainly won’t go now”, said Murat Usmanov who now lives in a central Asian Republic.

“Their [Wagner’s] quality also deteriorated, the people they are sending are substandard. The Russians underestimated the Ukrainians who are better trained and better armed. With winter coming a lot of people on the Russian side won’t have proper clothing, proper equipment, proper weapons, It’s going to get even more bad for them.”

Monkeypox outbreak slowing in the US, but health leaders say critical challenges remain

Opinion: What Putin needs from Xi — and what he’ll get