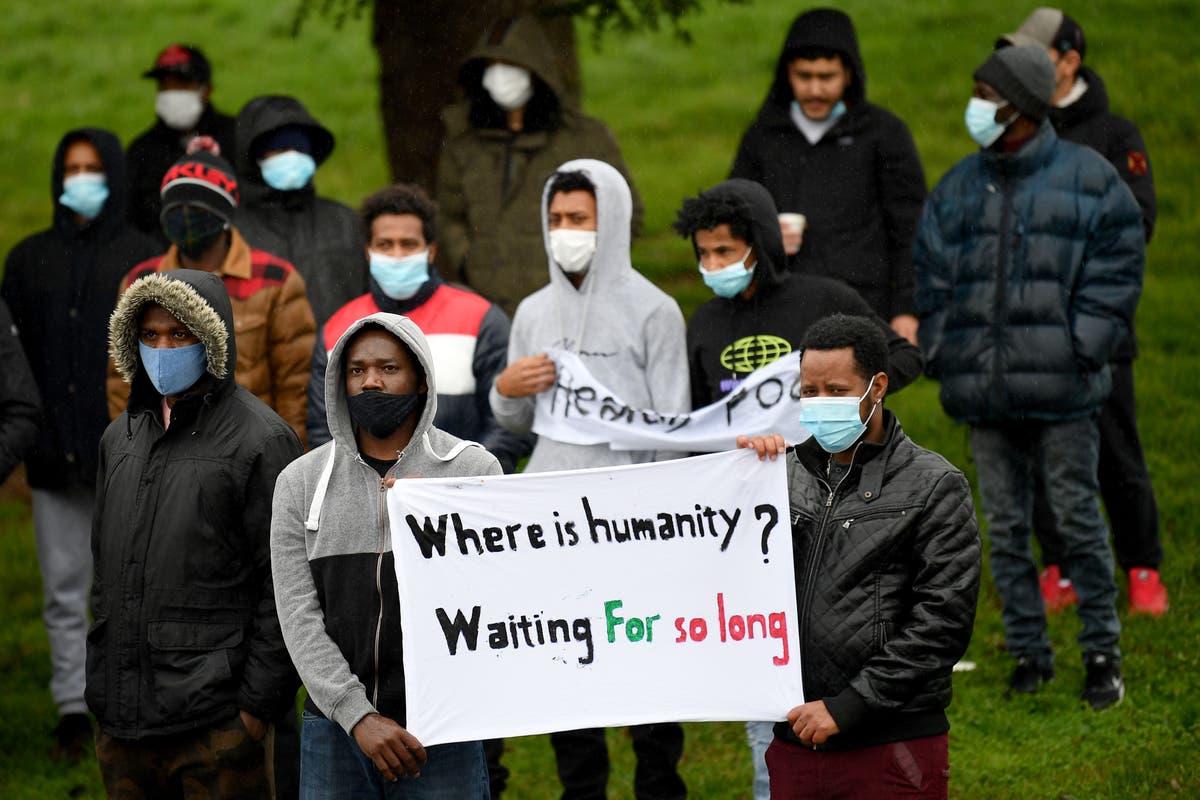 The number of people waiting on asylum claims has reached more than 140,000, new figures show, as Labour said the decision-making system had “collapsed”.

Applications have reached their highest on record – rising by over 20,000 in the last three months alone, and are three times higher than the same point in 2019.

Amid mounting pressure on hotels and processing centres, critics have said the Home Office needs an “urgent overhaul” after the number of claims being processed plumeted despite rocketing English Channel crossings.

Figures show the proportion of asylum applications granted is the highest for 32 years, at 77 per cent, but the vast majority of small boat migrants have not had theirs considered.

Some Channel migrants have been waiting since 2018 for a decision, but ministers have intensified attempts to declare them “inadmissible” for consideration because they passed through France.

Yvette Cooper, the shadow home secretary, accused the government of “mismanagement of the immigration and asylum systems”.

“Asylum decision-making has collapsed – with only 2 per cent of people who arrived in small boats over the last year having had their cases decided,” she added.

“They have no proper grip or control, they just ramp up the rhetoric instead of putting sensible policies in place.”

The Law Society of England and Wales said the Home Office needed an “urgent overhaul”, amid a drive to recruit more decision-makers and give them “retention allowances” of £1,500 to £2,500 to stay in their posts.

Deputy vice president Richard Atkinson said: “Far too many people are waiting far too long for a decision on their request for sanctuary in the UK.

“There is also still a problem with the quality of Home Office decision-making – 52 per cent of decisions were overturned when appealed .

Of the small proportion of asylum claims considered, 77 per cent were granted in the year to September – the highest proportion since 1990.

Home Office officials say the rate will fall as it tries to process more cases, because it has been prioritising extremely vulnerable people, children and “high harm cases” that are more likely to succeed.

The Home Office has a legal duty not to leave asylum seekers destitute while they await a decision, meaning the backlog is driving chaotic attempts to find hotel places because of a lack of proper accommodation.

Around 40,000 asylum seekers are currently being housed in hotels, as well as more than 9,000 Afghans who were evacuated or resettled following the Taliban takeover in August 2021.

A young woman who fled to Kabul airport with just her laptop and phone, and was put on a flight hours before an Isis suicide bombing that killed almost 200 people, lived in a hotel room with her sister for 14 months.

“Initially they said it would be for six months and ‘then we will give you a house anywhere you want to live’, then they said ‘we will have to move you where we find houses’,” she told The Independent. “Now they are saying ‘you have to find a home for yourself’.”

The university student, in her 20s, eventually contacted a local council directly and secured a flat for her family this month after explaining their situation.

She said it was “difficult” and depressing living in the hotel, where she struggled to sleep because of noise and said there was a “lot of trauma” among refugees trying to access mental health services.

“I was expecting a very imaginary life, having our own home immediately,” she added. “I know people who have been moved to four or five different hotels.”

Professor Louise Ryan, who has been conducting research on the experiences of Afghan refugees with London Metropolitan University, said the government’s “glacial pace” finding accommodation had caused a “monumental waste of money” on hotels.

“There is an artificial distinction being created between the Afghans arriving on small boats and the ones evacuated from Kabul airport,” she told The Independent.

“We interviewed people who had gone to the airport and tried to get through the terrifying crush but failed. They then made their way on small boats … and they could find themselves being put on a plane to Rwanda.”

Afghans made up 15 per cent of small boat arrivals in the year to September, while the largest single nationality is now Albanian and there are also significant numbers of Iranians, Iraqis and Syrians.

Home Office figures show that 90 per cent of people crossing the Channel on dinghies claim asylum, but only 83 per cent of claims made by small boat migrants since 2018 have been decided and 43,476 applications are awaiting a decision.

The number of refugees resettled under government programmes, outside the bespoke Afghan and Ukraine schemes, have dropped since the coronavirus pandemic, with 1,400 people resettled in the past year compared with 5,600 in 2019.

Maria Stephens, the head of campaigns at Refugee Action, said snowballing delays were “destroying lives”, adding: “Waiting for a decision is catastrophic for the mental health of people seeking asylum, who must live in poverty and isolation.

In a letter marking the worst ever migrant boat sinking in the Channel, a group of humanitarian organisations from across the UK, France and Belgium called on the British and French governments to use “all necessary means to open up safe routes for passage for those who want them”.

Signatories include Amnesty International, Oxfam and Freedom from Torture said their “determination to ignore and neglect the human rights of refugees at their borders have led to these tragedies and will lead to more”.

Responding to Thursday’s statistics, Suella Braverman insisted that Britain was “providing refuge to those in need”, hailing the arrival of 144,600 Ukrainians, nearly 23,000 people from Afghanistan and over 144,000 from Hong Kong.

The home secretary added: “My priority remains tackling the rise in dangerous and illegal crossings and stopping the abuse of our system. It is vital we restore public confidence and take back control of our borders.”

Flashpoint is raising $75M for IT investment in Ukraine.