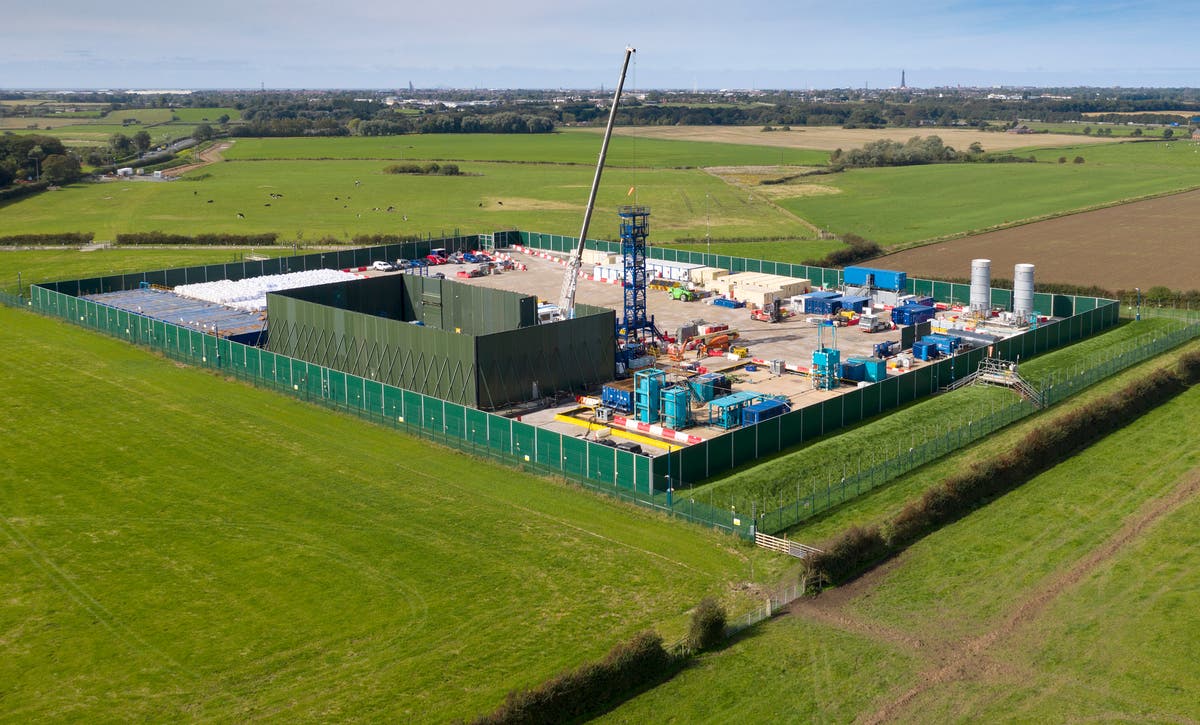 Liz Truss’s claims gas from fracking could flow in six months has been called into doubt – with one company estimating it could take as long as 18 months.

The government lifted the ban on fracking on Thursday, despite warnings from climate campaigners and geologists.

Ms Truss is hoping the move will help make the UK more self-sufficient for energy, but campaigners have warned it would do little to alleviate the huge bills Britons currently face.

And the fracking industry has said the planning and environmental permit process would need to be sped up and earthquake limits relaxed for their investment to make sense.

Firms need both environmental and planning permits to start fracking, as well licences, Health and Safety Executive scrutiny and consent from the Business Department, according to the UK Onshore Oil and Gas (UKOOG) industry body.

The UKOOG said the planning and environmental permits took the most time, with previous applications taking in excess of 50 weeks – not including appeals.

The planning process was a major cause of delay before the 2019 ban on fracking, with academics and industry saying decisions often took months if not years.

The closest to being drill-ready with regards to planning and environmental permissions appears to be Third Energy’s site in Kirby Misperton in North Yorkshire, which has conditional planning permission for fracking at the site.

But, according to the Environment Agency, they would need to make alterations to their environmental permit before fracking. However, the company told The Independent it was no longer considering gas production of any kind.

INEOS has permits from the Environment Agency to drill a well to explore for shale gas at three sites but not to carry out fracking, and planning permission at at least two of those sites has either lapsed or been refused.

Cuadrilla Resources has an environmental permit for its Preston New Road site in Lancashire but its planning permission now only covers the restoration of the site to its previous green-field state and not further drilling.

And Island Gas Limited would need to reapply for a permit to carry out hydraulic fracturing at its Springs Road site, according to the Environment Agency, and its planning permission to drill two exploratory wells for shale gas has lapsed.

A spokesperson for Island Gas said it hoped to deliver gas from well pads in the East Midlands in 12-18 months if regulation is streamlined and made more efficient.

“That is why I am sceptical about the pace,” said Richard Davies, a petroleum geologist in response to The Independent’s findings. “These are resources, not reserves. I don’t know why our government is so sure it can be done [in six months].”

The government has said applications will be considered “where there is local support” but has not explained how they will measure that.

Business Secretary Jacob Rees-Mogg, whose brief involves overseeing the UK’s energy policy, said only that companies will have the responsibility to “develop packages that make the extraction of shale gas attractive to local communities.”

His remarks have led to accusations that he was conflating consent with compensation. Many local communities have made clear they are ready to fight against drilling once again.

Stuart Haszeldine, of the school of geosciences at the University of Edinburgh, said it was “very hard” to see how gas can flow in six months, adding that there are “many chances for local democracy to intervene.”

However, Professor Haszeldine said the clear direction of travel was towards deregulation, pointing to Mr Rees-Mogg’s statement this week that while the government will “always try” to limit disturbance to those living near sites, “tolerating a higher degree of risk and disturbance appears to us to be in the national interest.”

In the budget on Friday the government announced new legislation to accelerate priority infrastructure projects across England by “minimising the burden” of environmental assessments, making consultation requirements “proportionate” and reforming habitats and species regulation among other changes.

“These reforms will mean that energy infrastructure, including renewables, gets built more quickly,” it says.

It was not immediately clear whether fracking would be impacted by the new legislation. HMT said it would set out further detail in the bill in coming months.

The Guardian reported on Thursday that Ms Truss was considering designating fracking sites as nationally significant infrastructure, which means they could bypass normal local planning requirements.

Between 2008 when the first onshore licences were awarded for shale gas exploration in the UK and 2019 when the government implemented a ban on fracking, there have only been three test wells which have been explored for shale gas in the UK.

The first was at Preese Hall near Blackpool in Lancashire in 2011, which led to a felt quake and the first suspension on fracking. The other two wells were at Preston New Road site also near Blackpool, where operations were accompanied by quakes, the largest of which had a magnitude of 2.9 on the Richter scale.

That quake was strongly felt at distances of up to a few kilometres from the epicentre, and the ban on shale gas fracking was implemented following a review of the events.

A spokesperson for Island Gas said the company was pleased with the steps the government is taking to streamline and make “fit for purpose” the regulation around fracking. INEOS said it welcomed the decision to lift the ban, and that the government should treat shale gas development as a national infrastructure priority and that planning regulations be developed accordingly. A spokesperson for Cuadrilla did not respond to a request for comment.

A BEIS spokesperson said: “In light of Putin’s illegal invasion of Ukraine and weaponisation of energy, the government is taking concrete steps to increase home-grown sources of energy, reduce the UK’s reliance of foreign imports, and explore all possible options to boost domestic energy security.”

Protests, drafting mistakes and an exodus: Putin’s mobilization off to chaotic start