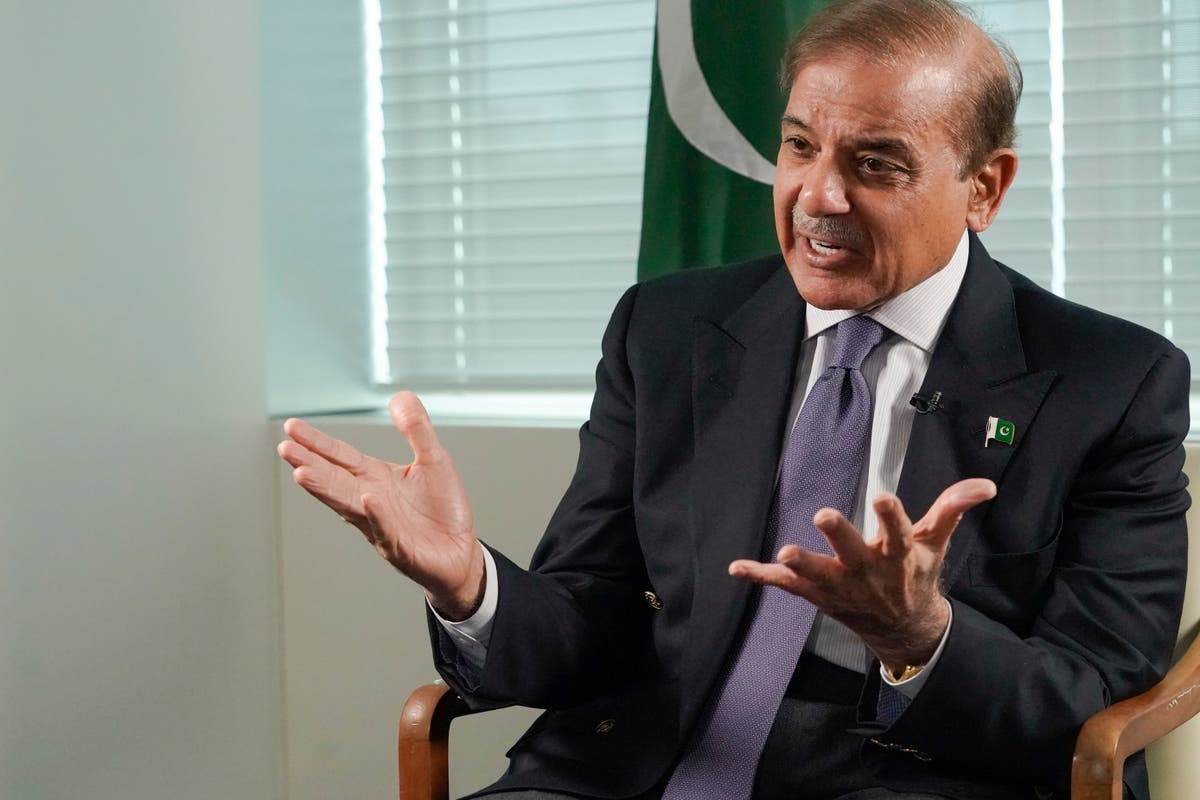 Flooding likely worsened by climate change has submerged one-third of Pakistan’s territory and left 33 million of its people scrambling to survive, according to Pakistan’s prime minister, who says he came to the United Nations this year to tell the world that “tomorrow, this tragedy can fall on some other country.”

In a wide-ranging interview with The Associated Press, Shahbaz Sharif exhorted world leaders gathered for their annual meeting at the General Assembly to stand together and raise resources “to build resilient infrastructure, to build adaptation, so that our future generations are saved.”

The initial estimate of losses to the economy as a result of the three-month flooding disaster is $30 billion, Sharif said, and he asked U.N. Secretary-General Antonio Guterres on Thursday to hold a donors’ conference quickly. The U.N. chief agreed, Sharif said.

“Thousands of kilometers of roads have been smashed, washed away — railway bridges, railway track, communications, underpasses, transport. All this requires funds,” Sharif said. “We need funds to provide livelihood to our people.”

Sharif, the brother of disgraced former prime minister Nawaz Sharif, took office in April after a week of turmoil in Pakistan. He replaced Imran Khan, a cricket star turned politician who was one of the country’s highest-profile leaders of the past generation and retains broad influence. Khan was ousted in a no-confidence vote after 3½ years in office.

While climate change likely increased rainfall by up to 50% late last month in two southern Pakistan provinces, global warming wasn’t the biggest cause of the country’s catastrophic flooding, according to a new scientific analysis. Pakistan’s overall vulnerability, including people living in harm’s way, was the chief factor.

Whatever the case, Sharif said the impact on his country is immense. More than 1,600 people have died, including hundreds of children. Crops on 4 million acres have been washed away. Millions of houses have been damaged or completely destroyed, and life savings have disappeared in the devastating floods triggered by monsoon rains.

Framing Pakistan as a victim of climate change worsened by other nations’ actions, Sharif said Pakistan is responsible for less than 1% of the carbon emissions that cause global warming.

“We are,” the prime minister said, “a victim of something we have nothing to do with.”

Even before the floods began in mid-June, Pakistan was facing serious challenges from grain shortages and skyrocketing crude oil prices sparked mainly by Russia’s Feb. 24 invasion of Ukraine and the war that has followed. Sharif said skyrocketing prices have put the import of oil “beyond our capacity,” and — with the damage and destruction from the massive flooding — solutions have become “extremely difficult.”

Pakistan may have to import about a million tons of wheat because of the destruction of farmland. He said it could come from Russia, but the country is open to other offers. The country also needs fertilizer because factories involved in their production are closed.

Sharif said the country has “a very robust, transparent mechanism already in place” to ensure that all aid items are delivered to people in need. In addition, he said, “I will ensure third-party audit of every penny through international well-reputed companies.”

The Pakistani leader said he met top officials from the International Monetary Fund and World Bank and appealed for a moratorium on loan repayments and deferment of other conditions until the flood situation improves.

“They sounded very supportive,” Sharif said, but he stressed that a delay “can spell huge consequences” — both for the economy and for the Pakistani people.

One dimension of grain purchases taps into one of Pakistan’s most existential issues — its relationship with neighboring India.

Would Pakistan consider buying grain from India if needed? Sharif said that notion is impeded by “a legal bottleneck” — Kashmir, the Himalayan territory claimed by both countries but divided between them. It has been at the center of two of the four wars India has fought with Pakistan and China.

“India is a neighbor, and Pakistan would very much like to live like a peaceful neighbor with India,” Sharif said. “But that has certain prerequisites. India has to understand that unless and until the burning issue of Kashmir is resolved through peaceful talks … like peaceful neighbors, with the sincerity of purpose, we will not be able to live in peace.”

“And that is a great shame and embarrassment,” he said. “Because in this day and age, we need our resources to feed our people, to educate them, to provide job opportunities, to provide health opportunities. India can’t afford to spend money on buying ammunition and defense equipment. Nor can Pakistan.”

On the other side of Pakistan, to the west, sits Afghanistan — a place that shares geography, strategic interests and much ethnic heritage with Sharif’s nation. Sharif said its Taliban rulers, who have been in power for a year, have “a golden opportunity to ensure peace and progress” for the people by adhering to the Doha Agreement, which the nation’s previous, more internationally minded government signed in February 2020 with former U.S. president Donald Trump’s administration.

The Taliban should provide equal opportunities including education through college for girls, job opportunities for women, respect for human rights, and for that Afghan assets should be unfrozen, the prime minister said.

The Doha Agreement called for the United States to withdraw its forces, which current President Joe Biden did in a chaotic pullout as the Taliban were taking over the country in August 2021. The pact stipulated commitments the Taliban were expected to make to prevent terrorism, including obligations to renounce al-Qaida and prevent Afghan soil from being used to plot attacks on the U.S. or its allies as it was before 9/11.

If the Taliban signed the agreement, Sharif said, “they must respect it.”

“This is what law-abiding, peace-loving international community, including myself, expect from them,” he said. “And let’s work together in that direction.”

Relations between Pakistan and the United States have vacillated between strong and tenuous for more than a generation. After 9/11, the two were allies against extremism even as, many asserted, elements within Pakistan’s army and government were encouraging it.

Today, former prime minister Khan’s anti-American rhetoric of recent years has fueled anger at the United States in Pakistan and created some setbacks in ties.

In the interview, Sharif said his government wants “good, warm relations” with the United States and wants to work with Biden to “remove any kind of misunderstanding and confusion.”

In careful language that reflected his efforts to balance international and domestic constituencies, he sought to distance himself from Khan’s approach — and to reaffirm and restore the kind of ties that he said the people he represents would want.

“What the previous government did, in this behalf, was most uncalled for, was detrimental to Pakistan’s sovereign interests,” Sharif said. “It was definitely not in line with what ordinary Pakistanis would believe and expect.”