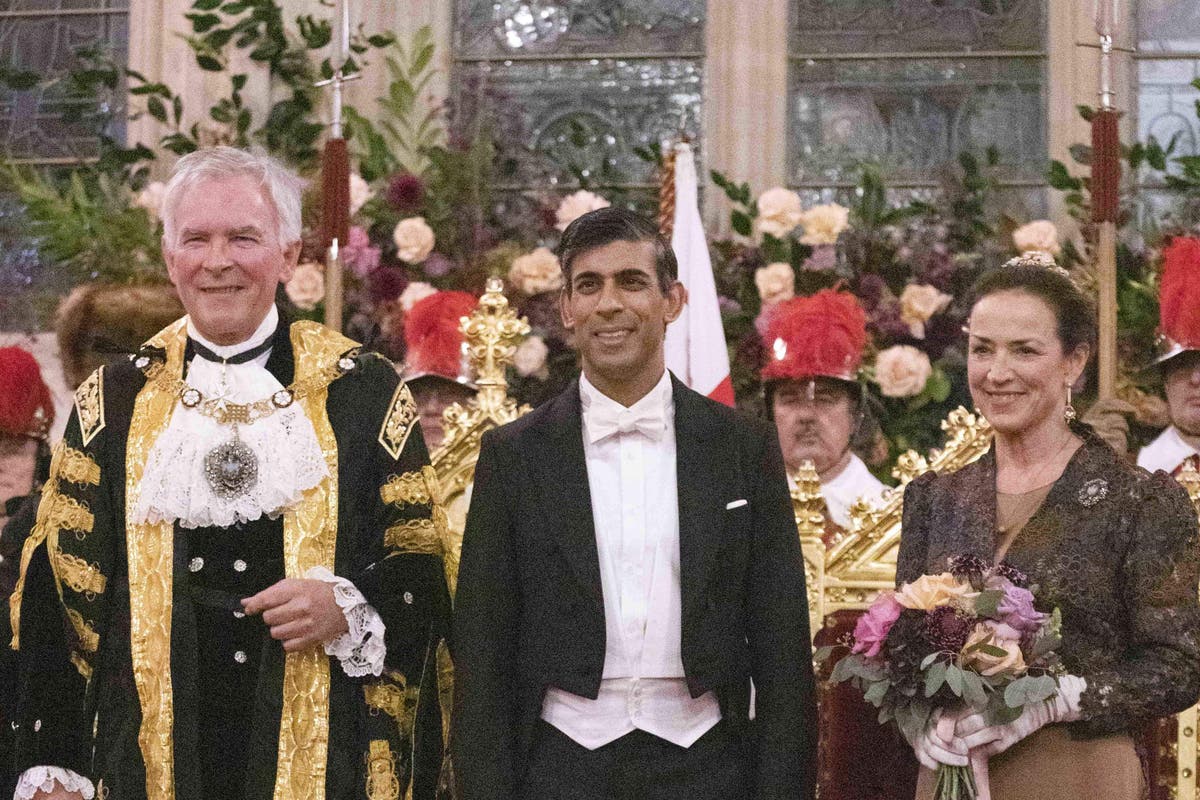 Prime Minister Rishi Sunak has offered a vision of “robust pragmatism” in standing up to global competitors like China, as he signalled an “evolutionary leap” in British foreign policy.

In his first major foreign policy speech, Mr Sunak indicated to international dignitaries and business leaders on Monday that he would set a fresh direction for the UK’s place in the world, after the premierships of Boris Johnson and Liz Truss.

Mr Johnson and Ms Truss were seen as taking more combative approaches with allies such as the French president Emmanuel Macron, but in his speech Mr Sunak balanced his thinking on China and Russia with a promise of better relations with Europe amid the ongoing war in Ukraine.

In the speech at the annual Lord Mayor’s Banquet in London’s Guildhall, Mr Sunak reiterated Government criticism of the arrest of a BBC journalist covering Covid protests in China.

He said: “Russia is challenging the fundamental principles of the UN Charter. China is consciously competing for global influence using all the levers of state power.

“In the face of these challenges, short-termism or wishful thinking will not suffice. We can’t depend on Cold War arguments or approaches, or mere sentimentality about our past.”

Describing the need for an “evolutionary leap” in British strategy, he said it would require “being stronger in defending our values and the openness on which our prosperity depends”.

“It means delivering a stronger economy at home, as the foundation of our strength abroad. And it means standing up to our competitors, not with grand rhetoric but with robust pragmatism.

“We will do all this not only through our diplomatic expertise, science and technology leadership, and investment in defence and security, but by dramatically increasing the quality and depth of our partnerships with like-minded allies around the world.”

It comes as the Government updates the integrated review of defence and foreign policy, after Chancellor Jeremy Hunt confirmed in his autumn statement that the defence budget will remain at least 2% of GDP.

Mr Sunak told his audience that the country had to “evolve” its approach to China.

While he said that the “golden era” of UK-Chinese relations was over, he said it was wrong to “rely on simplistic Cold War rhetoric”.

“We recognise China poses a systemic challenge to our values and interests, a challenge that grows more acute as it moves towards even greater authoritarianism.

“Instead of listening to their people’s protests, the Chinese Government has chosen to crack down further, including by assaulting a BBC journalist.”

But he also warned that the UK “cannot simply ignore China’s significance in world affairs – to global economic stability or issues like climate change”.

Mr Sunak said that with allies, the UK will “manage this sharpening competition, including with diplomacy and engagement”.

Elsewhere in his speech, Mr Sunak said that his administration was “reinvigorating” European relationships to tackle migration and improve security.

But alongside warm words, the prime minister also pledged to “never align” the UK with EU law.

“We’re also evolving our wider post-Brexit relations with Europe, including bilaterally and engaging with the new European Political Community,” he said in his speech.

“But this is not about greater alignment. Under my leadership we’ll never align with EU law.

“Instead, we’ll foster respectful, mature relationships with our European neighbours on shared issues like energy and illegal migration to strengthen our collective resilience against strategic vulnerabilities.”

Speaking to Channel 4 News before Mr Sunak’s speech, Sir Iain pointed to the treatment of BBC cameraman Edward Lawrence, who the broadcaster said was “arrested and handcuffed” while covering demonstrations in China against Covid restrictions, and then “beaten and kicked” by police.

“On the very day we see all of that, the Government comes out with its robust pragmatism, which I think to most people out there means kind of anything you want it to mean, and that sounds to me like getting pretty close to appeasement.”

The Labour MP said: “All it shows is that once again the Conservative Government is flip-flopping its rhetoric on China.

“The Government urgently needs to publish its long-promised China strategy as well as its update to the Integrated Review that is already out of date.”

Security minister Tom Tugendhat, who was a vocal China critic on the backbenches as chair of the Foreign Affairs committee, was pressed on Government policy as he appeared on ITV’s Peston show.

Offering his backing to the Prime Minister’s approach, he said: “It’s something I’m going to be holding this government to. I’ve been very clear on my position on China for many years now.”

He also said he was “pushing” the Government on the removal of Chinese-made CCTV cameras.

Mr Tugendhat, pressed on whether the Government might consider new sanctions on China amid a wave of protests there, said: “I very much hope that the Foreign Office is watching very closely and is going to take action on this because the Foreign Office has got a responsibility to supervise what’s going on within China.”