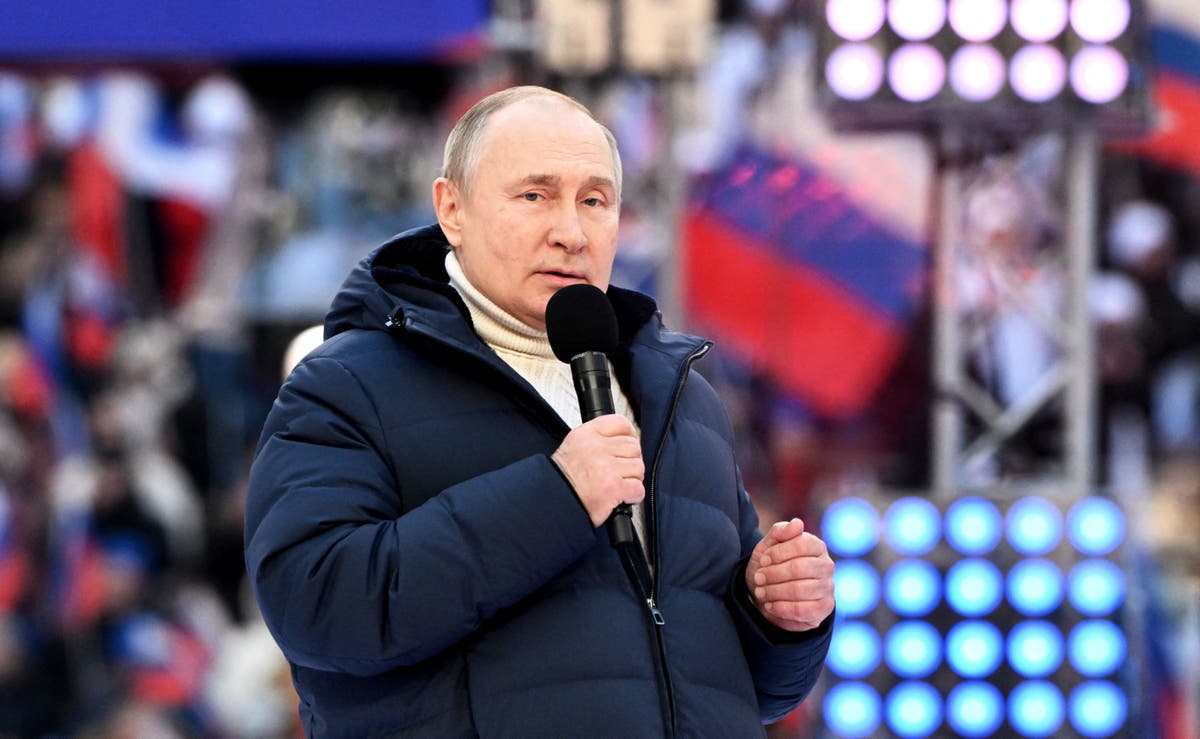 Frustrated by fierce Ukrainian resistance, Russian forces are now fighting a war of attrition and resorting to “reckless and indiscriminate use of firepower” that will result in more civilian casualties, a top British general has warned.

The UK’s chief of defence intelligence, Lieutenant General Sir Jim Hockenhull, said the Kremlin had been surprised by Ukraine’s military defiance and beset by problems of its own making, prompting a change in tactics more than three weeks into the invasion.

His comments on Friday came as Vladimir Putin delivered a speech at a football stadium in Moscow, where he tried to justify the invasion of Ukraine and praised Russian unity during a conflict that has incurred heavy losses for his troops and spurred an authoritarian crackdown at home.

Meanwhile, stalled Russian forces in Ukraine continued to bombard cities, including the capital Kyiv, and the western city of Lviv – a gateway near the Polish border for people fleeing the war – where missiles struck an aircraft repair plant.

In the besieged southeastern city of Mariupol – which has endured some of the worst bombardment and humanitarian suffering during the 23-day war – Russia’s defence ministry said it was “tightening the noose”, and that “fighting against nationalists” was taking place in the city centre. Mariupol’s mayor, Vadym Boichenko, told the BBC that fighting was “really active”.

Ukrainian president Volodymyr Zelensky warned that more than 1,000 people are still trapped in makeshift bomb shelters beneath a destroyed theatre in the city, which was bombed earlier this week, after about 130 people were rescued from the site on Friday.

While president Putin said at the rally in Moscow that “we will absolutely accomplish all of our plans” in Ukraine, Lt Gen Hockenhull countered it was clear that the Kremlin has still not achieved any of its initial objectives in what it is calling a “special military operation”.

“Russia is now pursuing a strategy of attrition. This will involve the reckless and indiscriminate use of firepower,” the British general said. “This will result in increased civilian casualties, disruption of Ukrainian infrastructure and intensify the humanitarian crisis.”

Russian forces have suffered heavy losses while reducing residential areas to rubble, with as many as 7,000 troops having died so far in the fighting. That figure includes four major generals and a number of other senior officers, US sources estimate.

Lt Gen Hockenhull also said that the Kremlin was tightening its grip on Russian media to mask its struggles on the battlefield.

“The Kremlin is attempting to control the narrative, hide operational problems and obscure high Russian casualty numbers from the Russian people,” he said.

Moscow recently passed a law imposing a jail term of up to 15 years for spreading what it deems “fake news” about the military, while nearly 15,000 people have been arrested at anti-war demonstrations across Russia since the 24 February invasion, according to the OVD-Info protest monitoring group.

Amid this unrest at home, Mr Putin – who earlier this week lashed out at domestic “traitors” – praised Russian “unity” during his five-minute speech at the stadium that hosted the 2018 World Cup final.

Dressed in a turtleneck and coat and cheered on by tens of thousands of people waving Russian flags, the Kremlin leader stressed that the invasion would succeed.

“Shoulder to shoulder, [Russian soldiers] help each other, support each other and when needed they shield each other from bullets with their bodies like brothers,” Mr Putin said, against a backdrop of people holding signs that featured slogans such as “For a world without Nazism” and incorporated the “Z” symbol that Russian forces have used as a motif in Ukraine.

“Such unity we have not had for a long time,” he added. As Mr Putin was finishing his speech, the broadcast was suddenly cut off; the Kremlin later blamed the interruption on a technical fault.

While Mr Putin delivered his address, US president Joe Biden spoke to his Chinese counterpart Xi Jinping and said that Beijing would face consequences not just from Washington but the wider world if China offers assistance to Russia in Ukraine.

China is the only world power that has yet to condemn Russia’s invasion, and Washington fears Beijing may be considering giving Moscow financial and military support.

In the call, which lasted nearly two hours, China’s president told Mr Biden that the war must end as soon as possible and called on Nato countries to speak with Moscow. Mr Xi said that conflicts and confrontations were in no one’s interests, according to a Chinese foreign ministry statement.

Discussions between Russian and Ukrainian negotiators continued on Friday, and the leader of the Kremlin’s delegation said the sides had moved closer to agreement on the issue of Kyiv dropping its bid to join Nato and adopting a neutral status. The Ukrainian side gave no immediate account of the negotiations.

Meanwhile, Mr Putin’s troops continue to bombard eastern Ukrainian cities including Kharkiv and Mariupol, and fire missiles at Kyiv despite having been kept at bay at the gates of the capital.

Early morning barrages on Friday hit a residential building in Kyiv’s Podli neighbourhood, killing at least one person, according to emergency services. The city’s mayor, Vitali Klitschko, said 19 were wounded in the shelling.

The fighting has now forced at least 3.2 million people to flee Ukraine, while an additional 6.5 million have left their homes for other parts of the country, according to the UN.

The UN World Food Programme warned on Friday that food supply chains in Ukraine are collapsing, with a portion of infrastructure destroyed and many grocery stores and warehouses empty.

The Independent has a proud history of campaigning for the rights of the most vulnerable, and we first ran our Refugees Welcome campaign during the war in Syria in 2015. Now, as we renew our campaign and launch this petition in the wake of the unfolding Ukrainian crisis, we are calling on the government to go further and faster to ensure help is delivered. To find out more about our Refugees Welcome campaign, click here. To sign the petition click here. If you would like to donate then please click here for our GoFundMe page