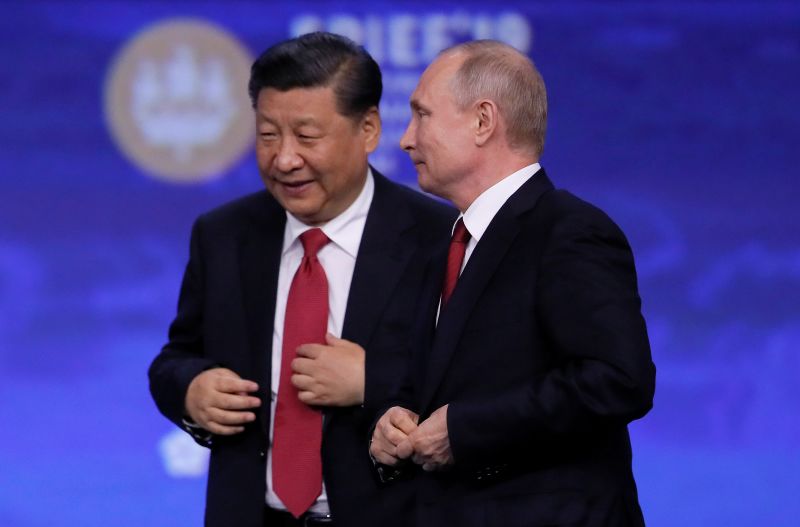 Chinese leader Xi Jinping is meeting with Russian President Vladimir Putin Thursday in a show of diplomatic support, as Moscow contends with growing international isolation over its faltering invasion of Ukraine.

In their meeting, Russian state media reported Putin condemned US “provocations” in the Taiwan Strait, and said he “highly appreciates” China’s “balanced position” on the Ukraine crisis.

The two authoritarian leaders have emerged as close partners in recent years, propelled by growing conflict with the West and a strong personal bond.

China has offered tacit support for Russia over Ukraine, while Moscow has backed Beijing and criticized Washington over US House Speaker Nancy Pelosi’s visit to Taipei in August. Beijing responded with unprecedented military drills around the self-governing diplomatic island, which it claims as its own territory.

The two are holding talks in Uzbekistan, at a summit of the Shanghai Cooperation Organization, a regional security-focused grouping that also includes India, Pakistan and four Central Asian nations.

In a symbolic show of force and unity, Russian and Chinese navies conducted joint patrols and exercises in the Pacific Ocean just hours before their leaders’ meeting, according to Russia’s Ministry of Defense.

The meeting, their first face-to-face since the invasion, comes at a potentially consequential moment for Putin, whose troops are retreating en mass in the northeast of Ukraine, losing more territory in a week than they captured in five months.

Putin is one of only a handful of world leaders that Xi has met with face-to-face since early 2020. The Russian leader traveled to Beijing for its Winter Olympics in February this year, and was seen as the most prominent world leader to join the event. A number of Western nations declared a diplomatic boycott, citing China’s human rights record.

It was at that meeting that the two leaders framed their “no-limits’ partnership, and released a 5,000-word document voicing their shared opposition to the “further enlargement of NATO.”

China has refused to condemn Russia’s invasion of Ukraine while stepping up economic assistance to its neighbor, boosting bilateral trade to record levels in a boon to Russian business amid Western sanctions.

For Xi, meanwhile, the meeting comes as part of his first trip outside of China’s borders in more than two years, and just weeks before he seeks to secure a norm-breaking third term at a major political meeting in Beijing – a move that will cement his status as China’s most powerful leader in decades.

China has turned increasingly inward since the beginning of the pandemic. Xi’s trip to Central Asia is a return to the world stage and offers him an opportunity to show that despite growing tensions with the West, China still has friends and partners and is ready to reassert its global influence.

On his first stop, Xi visited Kazakhstan, where he unveiled in 2013 his flagship Belt and Road Initiative, a massive infrastructure project that stretches from East Asia to Europe.

In a meeting with Kazakh President Kassym-Jomart Tokayev on Wednesday, Xi said China would like to partner with Kazakhstan to “remain pioneers in Belt and Road cooperation.”

The Chinese leader traveled to Uzbekistan on Wednesday evening and met with Uzbek President Shavkat Mirziyoyev. He also met the presidents of Kyrgyzstan, Tajikistan and Turkmenistan Thursday.