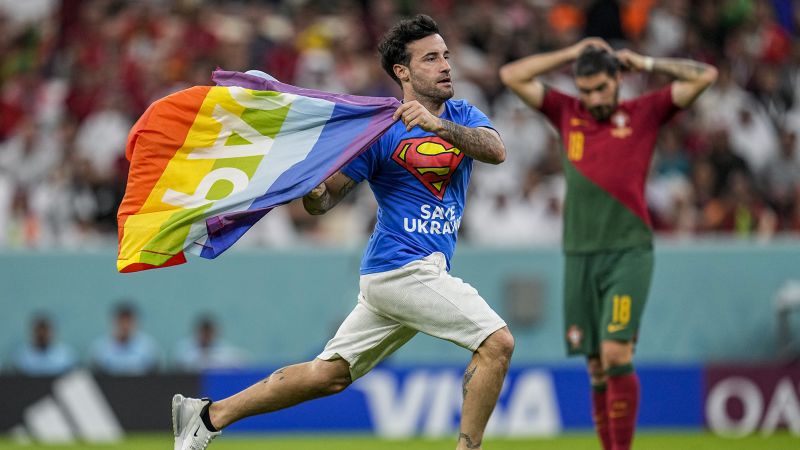 The World Cup match between Portugal and Uruguay was briefly interrupted by a pitch invader waving a rainbow flag on the field at the Lusail Iconic Stadium on Monday.

The FIFA global television feed avoided showing the pitch invader, but the individual could be seen running on the field trailing the flag as they were pursued by security officials.

Portugal won the match 2-0 thanks to two Bruno Fernandes second-half goals, a victory that ensured the European team’s qualification for the knockout stages.

The incident involving the pitch invader happened in the 51st minute of the game. Iranian referee Alireza Faghani was later seen picking the flag up off the turf.

Getty photos showed the flag carrier wearing a shirt with the words “RESPECT FOR IRANIAN WOMAN” written on the back and “SAVE UKRAINE” writing on the front.

CNN has reached out to FIFA and the Qatar tournament organizers for more information on the incident.

The participation of Iran, who play the US Men’s National Team on Tuesday in a Group B match, in the World Cup has been played out against the backdrop of the country’s domestic turmoil.

Meanwhile the issue of LGBTQ+ rights in Qatar has also been a constant theme at the World Cup. The rainbow is a symbol of LGBTQ+ pride.

On Saturday, two German soccer fans told CNN that they were asked by security officials to remove the rainbow-colored items they were wearing as they made their way to watch the World Cup match between France and Denmark.

Wahl said he was released 25 minutes after being detained and received apologies from a FIFA representative and a senior member of the security team at the stadium.

When asked to clarify the dress code for fans, FIFA referred CNN to the tournament handbook, which states “expats and tourists are free to wear the clothing of their choice, as long as it is modest and respectful to the culture.”

After some Wales fans were also denied entry into stadiums for wearing rainbow-colored bucket hats, the Welsh Football Association said FIFA told the federation on Thursday that rainbow-colored flags and hats would be permitted at World Cup stadiums in Qatar.

Qatar’s LGBTQ+ laws – where sex between men is illegal and punishable by up to three years in prison in the country – has come under criticism.

A report from Human Rights Watch, published last month, documented cases as recently as September of Qatari security forces arbitrarily arresting LGBT people and subjecting them to “ill-treatment in detention.”

However, the country has insisted that “everyone is welcome” at the tournament, adding in a statement to CNN this month that “our track record has shown that we have warmly welcomed all people regardless of background.”