In a twist, ‘Fortress’ Hungary opens doors to refugees from Ukraine after years of keeping migrants out 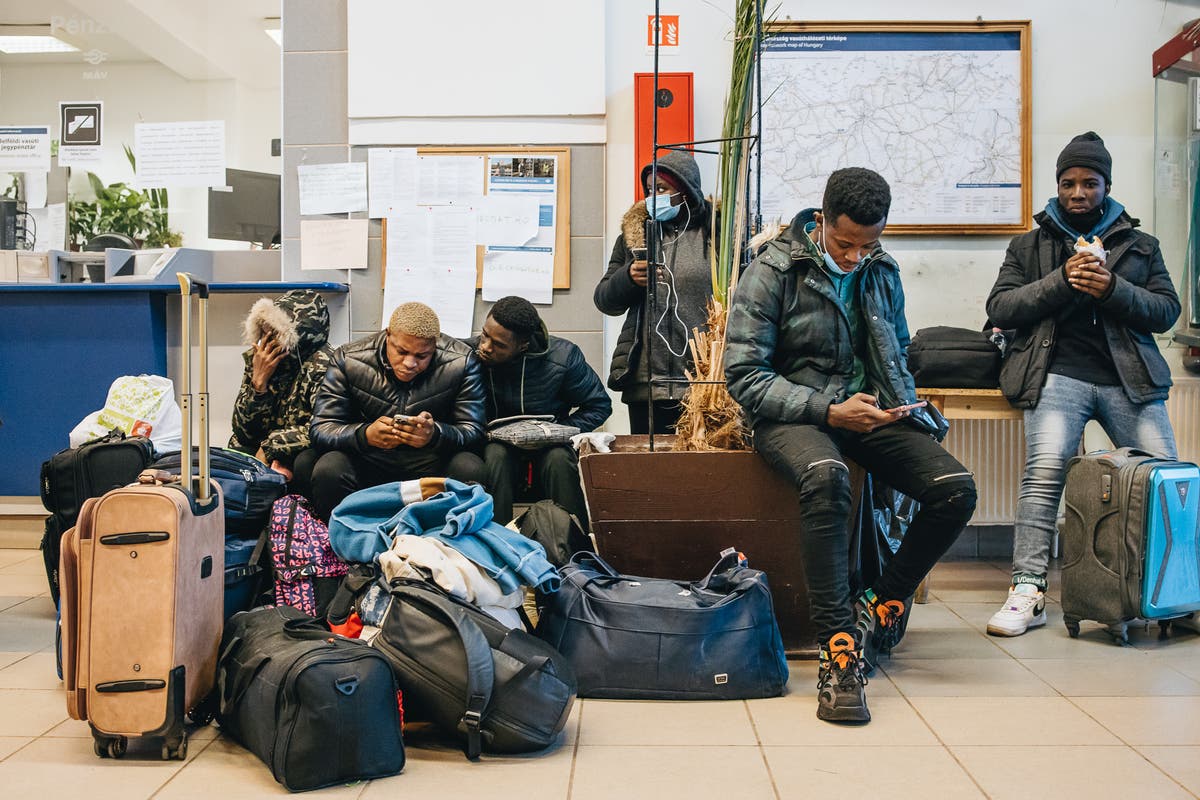 Eighteen-year-old Ire and his fellow Nigerian medical students escaped Ukraine as Russia’s invasion began, taking trains, buses and then, when confronting obstacles such as delayed transport connections and checkpoints, even fleeing on foot.

When they finally found refuge across the border, they were offered warm drinks, hot meals, and a promise of a place to stay at a nearby university dorm, as well as instructions on obtaining a one-month residency permit.

But it was in an unlikely place—Hungary, which only seven years ago became famous worldwide as the country where the government built barbed-wire fences, sprayed water cannons and deployed attack dogs in an effort to keep out refugees escaping wars in the Middle East – earning it the moniker ‘Fortress Hungary’.

“Everything has been so easy here,” said Ire, as he and his friends lounged outside the station in the border town of Zahony, where trains from Ukraine arrive and passengers transfer onto trains and minibuses to head deeper into Hungary.

“Everyone has been helpful and welcoming,” he told The Independent, asking that his last name not be published.

Eastern Europe has so far received more than a million refugees escaping the Russian war against Ukraine. Unlike with the 2015 wave of refugees, which included Syrians, Iraqis, and Afghans fleeing wars, Hungary and other nations such as Poland are mostly welcoming them with open arms.

They have rushed to offer the newcomers food, blankets, toys, and have even opened their homes to them. They have launched massive funding campaigns to gather cash and supplies.

In Brussels, European leaders are discussing granting Ukrainians three-year residency visas and other forms of help. Refugees are getting across borders in hours or days rather than being stuck in camps for months or even years.

Some observers have attributed the change in attitude to racism.

Ukrainians are white European Christians whereas those from the Middle East are brown-skinned and largely Muslim. Indeed Africans and Arabs attempting to cross into Poland have reported being barred or restricted from entering the country, prompting concern from the UN and Kyiv.

But Hungarians, Romanians, and Slovakians and others are welcoming thousands of Arabs, Africans and South Asians as well as Ukrainians fleeing the war, and some observers and analysts have attributed the softening attitude to shifting social and political winds.

“That we were racist is just a perception,” insisted Katalin, a young Hungarian volunteer helping the arriving refugees at a reception centre near Zahony. “The people are not the government.”

Nothing has changed, said Imra Szabjan, head of emergency management at Hungarian Charity Services of the Order of Malta, a volunteer organisation. “Hungarian people are welcoming, and we had the same apparatus in place in 2015,” he said.

Asked about the barbed wire fences built to keep refugees out in 2015, Mr Szabjan shrugged. “I didn’t build any fences,” he said.

In Hungary, which shares an often heavily traversed 85-mile border with Ukraine, Prime Minister Viktor Orban has softened his long-standing anti-refugee rhetoric ahead of 3 April elections. Unlike before, there are no political ads warning of refugees menacing Hungarians and no explicit accusations that his opponents want to replace locals with foreigners.

Mr Orban himself has opened his arms to the refugees, explaining to his supporters that those coming from Ukraine are in immediate danger, fleeing a war next door as opposed to Syrians who crossed several countries and bodies of water to reach Hungary in 2015.

On Thursday, during a visit to an aid centre in Beregsurany – a border town some 40 miles south of Zahony – Mr Orban told reporters that “we are able to tell the difference between who is a migrant and who is a refugee”.

“Migrants are stopped. Refugees can get all the help,” he said.

In 2015, the bulk of those arriving were single young men, bolstering fears propagated by the far right that they were coming to take jobs or threaten women.

Ukraine has all but barred men of fighting age from leaving the country, insisting they remain and fight the Russian invasion. Those arriving in Hungary – which has seen at least 133,000 refugees cross its borders over the last week –  are largely women and children, as well as foreign university students.

On Wednesday, in Zahony, a train full of dozens of mentally and physically disabled young Ukrainians disembarked, each gently guided to a shelter by Hungarian volunteers. Meanwhile, in Budapest, the Nyugati railway station has been turned into a makeshift humanitarian relief hub for those arriving from Ukraine.

Opposition leaders running against Mr Orban say the prime minister likely has concluded that demonising refugees is a political loser this year.

Xenophobes already support his Fidesz Party, which has become so far right it has been pressured to leave Europe’s alliance of centre-right parties, and swing and undecided voters are more concerned about the cost of living than immigration.

Security concerns about Isis and jihadi terrorism have faded. In 2015, Isis fighters menaced the west, but in 2022, eastern Europeans in Hungary, Romania and Poland are far more concerned about the threat of Russia, with whom Mr Orban and other European leaders are scrambling to sever ties.

“In the previous crisis, a lot of Hungarians thought people were coming here for economic reasons,” said Tamas Reves, a 23-year-old studying to become an educator at Hungary University of Debrecen, who was volunteering to help refugees at Zahony rail station.

“Now they see there is actual war.”

The Independent has set up a petition calling on the UK government to be at the forefront of the international community offering aid and support to those in Ukraine. To sign the petition click here.

The Independent is also raising money for the people of Ukraine – if you would like to donate then please click here for our GoFundMe page.

Observers have cautioned that the welcome to the refugees could be short-lived.

So far, a sizable number of the Ukrainians arriving in Hungary are ethnic Hungarians who speak the language and may even hold passports or be eligible for citizenship. Others are those with means, and along the highway between the Ukrainian border and Budapest, Range Rovers and Mercedes with Ukrainian plates could be spotted.

At one rest stop gas station, full of Ukrainians stocking up on snacks and sandwiches, one woman, holding a designer handbag, showed off her full-bred Bichon Frise poodle. Another asked where he could charge his electric car.

Hotels in Budapest are nearly full with Ukrainian lodgers, and flights out of eastern European cities near Ukraine’s borders are booked solid with well-to-do Ukrainians and displaced international students—even a few professional athletes—who have no need to shelter at camps or schools.

The biggest concern for Ire and his friends was finding a currency exchange to trade their dollars, as they prepared to find their way back home or to relatives in other parts of Europe.

When told they would have to wait several hours for the next train to their lodging at the dormitory of a nearby university, one insisted he was willing to splurge on a two-hour ride on a taxi to get him there faster.

Some observers and journalists in eastern Europe confided that they are worried about what happens after the first wave of well-off refugees – those with credit cards who can afford to jump the queue and get themselves and their families to safety – subsides.

Then a new wave of poorer and more desperate refugees will begin to show up, and the more toxic view of the newcomers is likely to re-emerge. They will include members of eastern Europe’s long-neglected Roma minority as well as Middle Eastern and South Asian labourers who had wound up in Ukraine.

Already hostility is building in some quarters.

One Hungarian journalist described how his grandparents, staunch supporters of Mr Orban, were permanently hostile to any immigrants or refugees, though they had welcomed Romanians escaping Nicolae Ceaucescu’s regime in the 1980s.

This week, his grandfather wavered a bit, wondering aloud whether they should donate food and clothes to the refugees, an idea quickly shot down by his grandmother.

In one Facebook post, a Hungarian man complained that “more than 100 Afro-Arab refugees” arrived by train and “only a few” Ukrainians, describing the wave of people arriving as a scheme to bring in foreigners.

“They came prepared for a big trip,” he wrote. “And they are not hungry or tired. This is the latest legal refugee travel agency route.”

Mr Reves, the university student, said he was not worried for now about  a repeat of 2015, simply because those arriving in Hungary have no intention of making a home in the country.

“I helped them all day and they say they will go on and not stay in Hungary,” he said. “There are a lot who say they will go home. The students will find other places in Europe. Hungary is not such an advanced country, so they won’t stay long. And the people are not so welcoming.”

Ors Lanyi contributed to this report

The Independent has a proud history of campaigning for the rights of the most vulnerable, and we first ran our Refugees Welcome campaign during the war in Syria in 2015. Now, as we renew our campaign and launch this petition in the wake of the unfolding Ukrainian crisis, we are calling on the government to go further and faster to ensure help is delivered. To find out more about our Refugees Welcome campaign, click here.