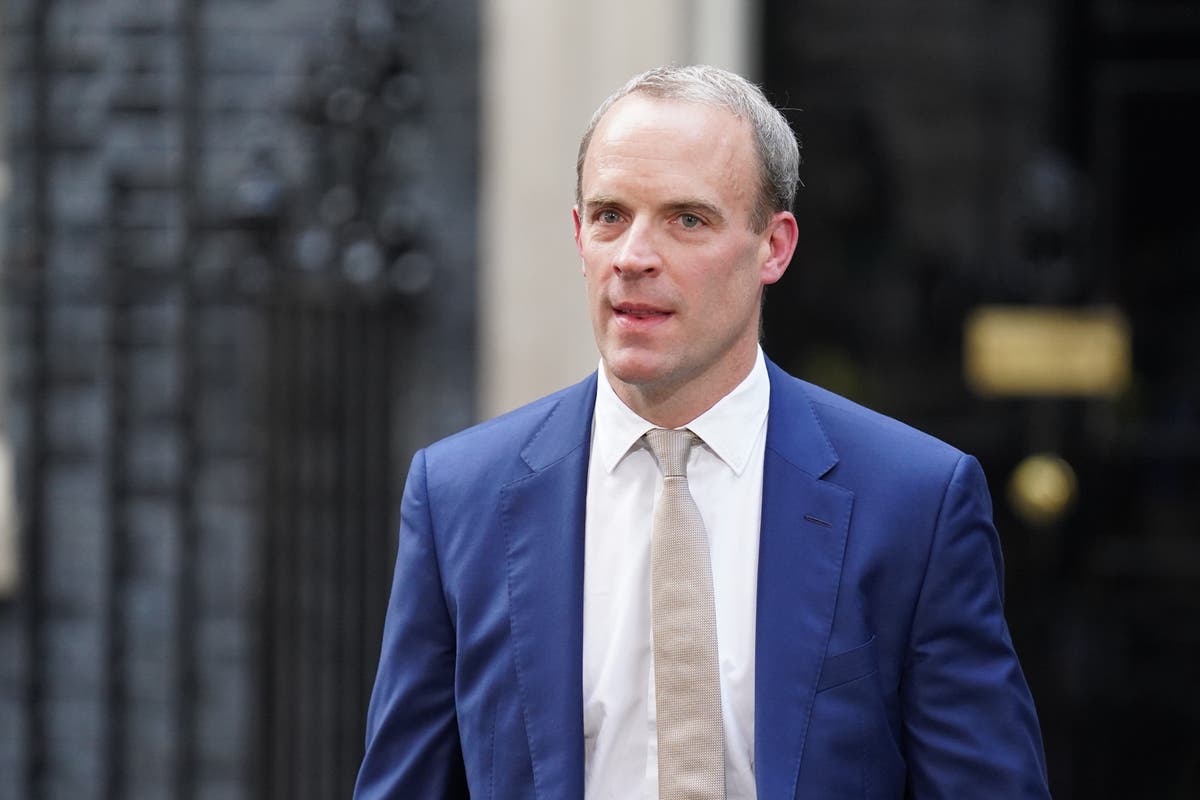 Two official bullying complaints have been filed against Dominic Raab over his behaviour at work, he has confirmed – just hours before he is set to appear at Prime Minister’s Questions.

The deputy prime minister has been accused of losing his temper and throwing food across the room, with civil servants too afraid to enter his office.

PM Rishi Sunak has so far stood by his deputy – previously emphasising that no formal complaints had been made against him.

But on Wednesday morning Mr Raab wrote to Mr Sunak to say he had “just been notified that two separate complaints have been formally made against me”.

Mr Raab is filling in for Mr Sunak at PMQs today because the PM is still away at the G20 summit in Bali.

Earlier Mr Sunak said his “absolute number one priority” is to deal with the “economic situation at home” as inflation hit 11.1 per cent.

“It’s the number one thing on people’s mind. It’s the thing that is causing most anxiety,” the UK prime minister said in a closing speech at the G20 summit.

The prime minister instead pointed the finger of blame at the Covid pandemic and Russia’s invasion of Ukraine.

While admitting that all countries have “idiosyncratic” factors affecting their growth, Sunak was unwilling at a press conference in Indonesia to concede that Brexit played this part in adding to the UK’s economic woes.

Our politics editor Andrew Woodcock has more below:

Raab: I look forward to addressing complaints and continuing in government

As we’ve been reporting, Dominic Raab has confirmed that two complaints have been submitted against him amid claims that he has bullied staff.

The deputy PM and justice secretary said he “looks forward to addressing these complaints, and continuing to serve you (Rishi Sunak) as Deputy Prime Minister, Justice Secretary and Lord Chancellor”.

You can read his letter in full here:

Two official bullying complaints have been filed against Dominic Raab over his behaviour at work, he has confirmed.

Savers to be squeezed in Hunt’s mini-Budget

Savers are set to be squeezed in tomorrow’s mini-Budget as chancellor Jeremy Hunt seeks to repair the public finances.

Tax-free allowances for ISAs and other saving products will be frozen when Mr Hunt outlines his plans to MPs in the Commons tomorrow, the Daily Mail reports.

The news came as inflation soared to 11.1 per cent last month – higher than experts had been expecting.

NHS at risking of ‘withering’ away, union boss says

The NHS is at risk of “withering away” without more funding, a union boss has said.

His comments come after nurses voted for strike action for the first time ever in an ongoing row over pay and conditions.

Nurses are calling for a 17 per cent pay rise.

Steve Barclay, the health secretary, described those demands as unreasonable but has said that his door “remains open” for negotiations.

Jonathan Ashworth, the shadow work and pensions secretary, claimed the UK was less able to “weather these storms” due to what he described as “12 years of lackluster economic performance” under the Conservative Party.

More comments from Mr Ashworth below:

Rishi Sunak said he and Joe Biden “didn’t discuss the trade deal in particular” but “we did discuss our economic partnership”.

“Both of us acknowledged the fact that, actually, the United States is our single largest trading partner and there’s a range of economic co-operation that is happening, and can continue to happen in the future.

“We talked about energy, for example, and how we can work together to improve energy security at a time when we’re all wanting to have more of that at home.

“So I am filled with optimism about our ability to do more trade with the US, to deepen our economic relationship but that that can happen in lots of different ways.”

Autumn statement will be ‘based on fairness’, Sunak claims

Rishi Sunak said the decisions in the autumn statement would be “based on fairness, they will be based on compassion”.

“I am confident that when people see the set of decisions in the round, when the Chancellor has delivered his statement, they will see that we have strived incredibly hard to deliver fairness, to deliver compassion and to put the UK on a positive economic trajectory,” he said.

Inflation ‘enemy we need to face down’, Sunak says

“It makes people poorer. That’s what inflation does,” he said. “It’s the enemy we need to face down. I want to make sure we do that. And we do that as quickly as possible.”

What can we expect from the Autumn Budget?

On that note, my colleage Joe Sommerlad has taken a look at what Jeremy Hunt is expected to announce tomorrow:

As inflation soars to 41-year high, what can households do to cope?