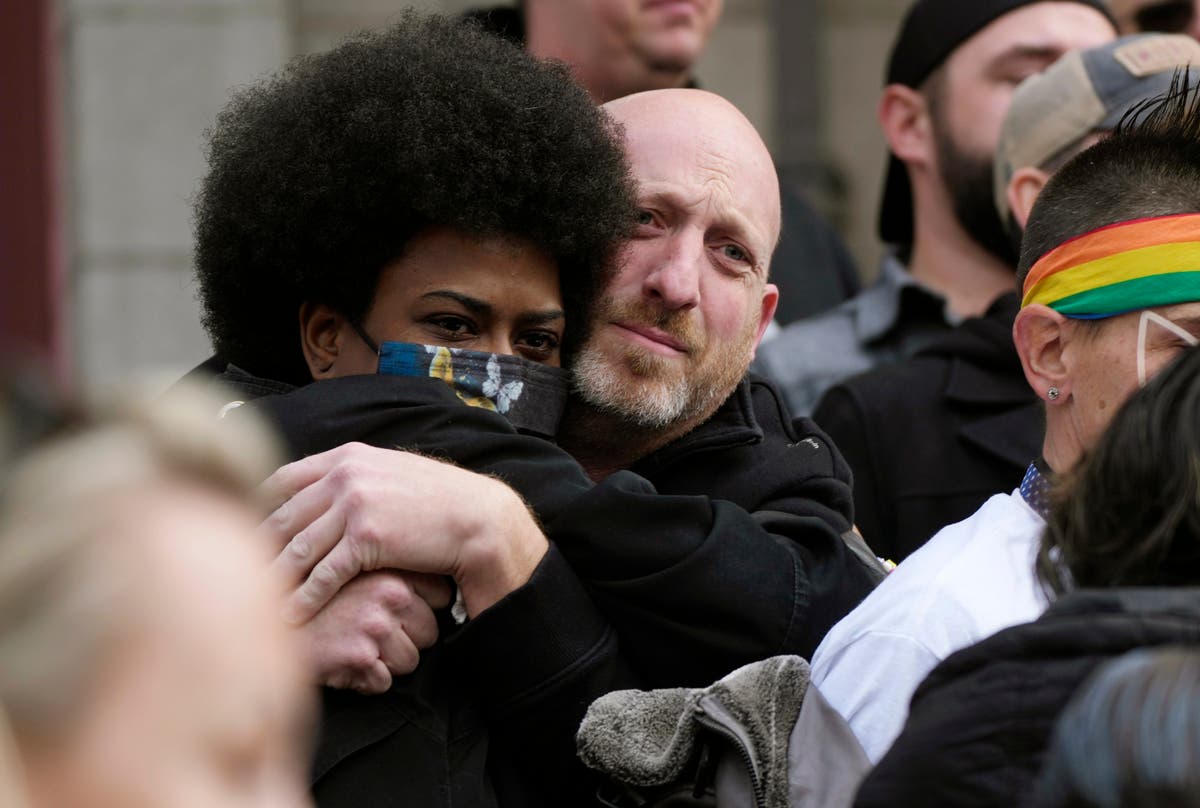 COLORADO SPRINGS SHOOTING — The alleged shooter facing possible hate crime charges in the fatal shooting of five people at a Colorado Springs gay nightclub has been ordered held without bail in an initial court appearance. Twenty-two-year-old Anderson Lee Aldrich appeared by video from jail Wednesday and could be seen slumped over in a chair with injuries visible on their face and head. Aldrich appeared to need prompting by defense attorneys when asked to state their name by the judge. By Colleen Slevin, Thomas Peipert, Jesse Bedayn and Brittany Peterson. SENT: 1,200 words, photos, video. With: COLORADO SPRINGS SHOOTING-SURVIVORS — A witness says the suspect showed “no hesitation” when entering Club Q and opening fire. (sent).

RUSSIA-UKRAINE-SHIFTING FRONT — Two weeks after retreating from the southern city of Kherson, Russia is pounding the territory across the Dnieper River with artillery. Ukraine is striking at Russian troops with its own long-distance weapons. Ukrainian officers say they want to capitalize on their momentum in the war against the invading Russian forces. The Russian withdrawal from the only provincial capital it gained in nine months of war was one of Moscow’s most significant battlefield losses. By Sam Mednick. SENT: 690 words, photos, video. With RUSSIA-UKRAINE-WAR — Ukraine works to restore power after devastating strikes (sent).

ELECTION-2022-SENATE-ALASKA — Alaska Republican U.S. Sen. Lisa Murkowski has won reelection, defeating Donald Trump-endorsed GOP rival Kelly Tshibaka. Murkowski beat Tshibaka in the Nov. 8 ranked choice election. The results were announced Wednesday, when elections officials tabulated the ranked choice results after neither candidate won more than 50% of first-choice votes. Murkowski wound up with 54% of the vote after ranked choice voting, picking up a majority of the votes cast for Democrat Pat Chesbro after she was eliminated. By Becky Bohrer. SENT: 620 words, photos. With: ELECTION-2022-HOUSE-ALASKA — U.S. Rep. Mary Peltola has been elected to a full term in the House. (sent).

VIRUS-OUTBREAK-CHINA — China is expanding lockdowns, including in a cental city where factory workers clashed this week with police, as its number of COVID-19 cases hit a daily record. SENT: 760 words, photos. With VIRUS OUTBREAK-CHINA-PHOTO-GALLERY — Beijing life on hold for lockdowns, COVID testing (sent).

WCUP-QATAR-ISRAEL-PALESTINIANS — The Israeli-Palestinian conflict has become the latest political flash point at the first World Cup in the Arab world — never mind that neither Israeli or Palestinian national teams are competing in the tournament. Thousands of Israeli soccer fans are expected to descend on Doha for the World Cup, even though Israel has no diplomatic ties with Qatar. By Isabel Debre. SENT: 1,090 words, photos.

POLAND-GERMANY-UKRAINE — Polish leaders say that an air-defense system which Germany offered Poland would be best given to Ukraine to help it protect itself against Russian strikes. SENT: 390 words.

HUNGARY-VISEGRAD-FOUR — A summit of four Central European leaders in Slovakia could be set to redefine a regional alliance that’s under strain from diverging approaches to the war in Ukraine. SENT: 710 words, photos.

WCUP-QATAR-NEW-CITY — Less than a month before it is set to host the World Cup final, Lusail City is oddly quiet. Wide empty streets, idle lobbies and construction cranes are everywhere in the sleek district 12 miles north of the capital, Doha, built to accommodate World Cup fans and hundreds of thousands of host nation Qatar’s residents. SENT: 670 words, photos.

WCUP-VIEWER’S GUIDE — Two of the best players in soccer start World Cup competition as Cristiano Ronaldo and Neymar both look to make history in Qatar. Ronaldo is attempting to become the first male player to score in five different World Cups when he leads Portugal against Ghana. Neymar is the leader of a Brazil team seeking a record-extending sixth World Cup title but first in 20 years. Brazil plays Serbia in its first match. By National Writer Jenna Fryer. SENT: 900 words, photos.

WCUP-SPAIN-COSTA RICA — Not since Pelé in 1958 had someone as young as Gavi scored a goal at the World Cup. The 18-year-old midfielder led the way as Spain pulled off the biggest World Cup victory in its history, routing Costa Rica 7-0. SENT: 620 words, photos.

WCUP-BELGIUM-CANADA — Thibaut Courtois saved an early penalty and Michy Batshuayi scored to give Belgium a 1-0 win, spoiling Canada’s return to the World Cup after 36 years. SENT: 670 words, photos. With WCUP-CANADA-STILL-WAITING — After 36 years, Canada has to wait longer for World Cup win (sent).

VIRUS-OUTBREAK-CHINA-IPHONE-FACTORY — The company that assembles Apple Inc.’s iPhones has apologized for what it said was a technical error that led to protests by employees over payment of wages offered to attract them to a factory that is under anti-virus restrictions. SENT: 510 words, photos.

FOUR-DEAD-UNIVERSITY-OF-IDAHO — Ten days after four University of Idaho students were stabbed to death in their rooms, police say they still have not identified a suspect or found a murder weapon, and they continued asking for tips and surveillance video. SENT: 540 words, photos.

COLORADO-POLICE-SHOOTING-INDICTMENT — A grand jury has indicted two Colorado sheriff’s deputies in the death of a 22-year-old man who was shot after calling 911 for roadside assistance while experiencing what his mother described as a mental health crisis, according to online court records. SENT: 460 words.

TRUMP-COLUMNIST LAWSUIT — A writer who accused former President Donald Trump of rape filed an upgraded lawsuit against him in New York, minutes after a new state law took effect allowing victims of sexual violence to sue over attacks that occurred decades ago. SENT: 650 words, photo.

ELECTION 2022-GOVERNOR-ALASKA — Alaska Republican Gov. Mike Dunleavy has won reelection, becoming the first governor in the state since 1998 to win back-to-back terms. Dunleavy received over 50% of the vote after final tallies were released Wednesday, and the race did not go to ranked choice voting. SENT: 730 words, photos.

BRAZIL-ELECTORAL-COURT-RULING — The head of Brazil’s electoral authority has rejected the request from President Jair Bolsonaro’s political party to annul ballots cast on most electronic voting machines, which would have overturned the Oct. 30 election. SENT: 530 words, photos.

INDONESIA-EARTHQUAKE — On the fourth day of an increasingly urgent search, Indonesian rescuers narrowed their work to a landslide where dozens are believed trapped after an earthquake killed at least 271 people, more than a third of them children. SENT: 450 words, photos.

RUSSIA-LGBTQ-RIGHTS — Russian lawmakers have given their final approval to a bill that significantly expands restrictions on activities seen as promoting gay rights in the country, another step in a years-long crackdown on the country’s embattled LGBTQ community. SENT: 290 words.

BRITAIN-STRIKES — Thousands of postal workers, university lecturers and schoolteachers in the U.K. were going on strike to demand better pay and working conditions amid the country’s cost-of-living crisis. SENT: 320 words.

ISRAEL-PALESTINIANS — The Israeli military says that the body of an Israeli teen that was taken by Palestinian militants from a West Bank hospital is being returned to his family. SENT: 350 words.

UN-HUMAN-RIGHTS-IRAN — Germany’s foreign minister has appealed for greater scrutiny of Iran ahead of a special session by the U.N.’s top human rights body devoted to the Islamic Republic’s bloody crackdown on protesters. SENT: 440 words.

SOUTH-KOREA-DEMOGRAPHIC-CRISIS — Many young people in South Korea have chosen not to marry or have children, citing a change of views toward a marriage and family life and uncertainty of their future. The country’s census shows the population shrank for the first time last year. SENT: 1,170 words, photos.

HONG-KONG-MILK-TEA — As tens of thousands leave Hong Kong for new lives abroad, many are craving a flavor from childhood that’s become a symbol of the city’s culture: the heavy, sweet milk tea served at diner-like restaurants called cha chaan tengs. Emigrants are seeking out the drink in cafes abroad, and going to classes to learn to brew it themselves. Exiled activist Lee Ka-wai said that immersing himself at a Hong Kong-style cafe in London with a cup of milk tea is a luxury. SENT: 1,100 words, photos.

KOREAS-TENSIONS — The powerful sister of North Korean leader Kim Jong Un made insult-laden threats against South Korea on Thursday for considering unilateral sanctions on the North, calling the South’s new president and his government “idiots” and “a running wild dog gnawing on a bone given by the U.S.” SENT: 870 words, photos.

SOUTH-CHINA-SEA — The Philippines has sought an explanation from China after a Filipino military commander reported that the Chinese coast guard forcibly seized Chinese rocket debris in the possession of Filipino navy personnel in the disputed South China Sea, officials say. SENT: 530 words, photos.

FBC—T25-MICHIGAN ST-MICHIGAN SCUFFLE — Seven Michigan State football players have been charged for their actions during the postgame melee in Michigan Stadium’s tunnel last month, according to a statement from the Washtenaw County Prosecutor’s Office. The most serious charge is against cornerback Khary Crump, who faces one count of felonious assault. The charges against the six others are misdemeanors. By Michael Tarm and Larry Lage. SENT: 800 words, photos.

HOW TO REACH US