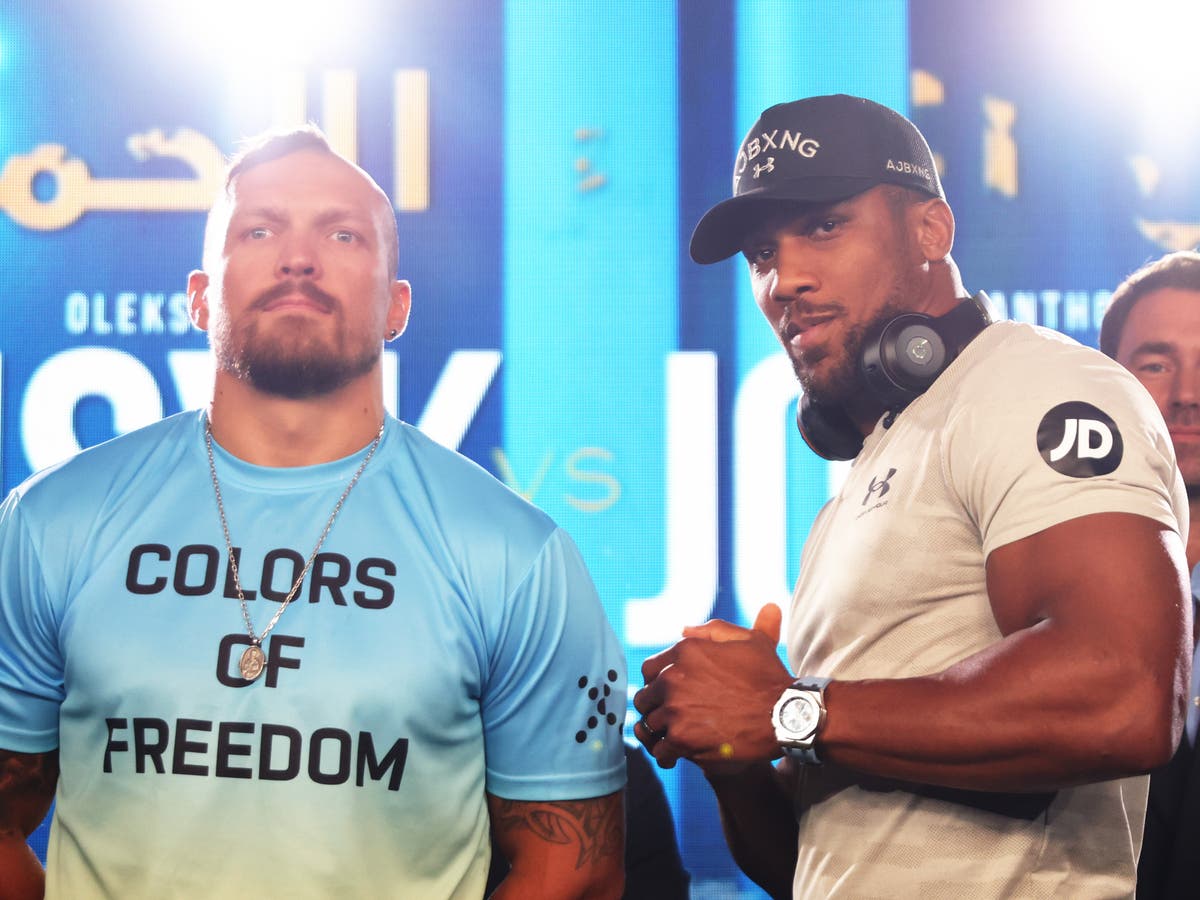 Anthony Joshua is once again on a redemption mission in a boxing ring in Saudi Arabia.

In Jeddah they are getting ready for a fight, getting ready for the caravan of boxing fools and insiders and dreamers and liars to fill the seaside city. There are five luxury coaches parked outside the media hotel. The tour was here before, back in December 2019 when Andy Ruiz lost his battle with the swinging fridge door. On that night outside, under storm clouds and rain, near Riyadh, Joshua avenged a loss from earlier in the year and jabbed poor Ruiz silly.

The deal done to secure that fight was a big move by the Saudis, arguably their biggest adventure in the world of sport. The Formula 1 family followed. There were accusations that it was the Kingdom’s latest and boldest attempt at sports-washing. That debate continues, but it is getting harder and harder to define sports-washing clearly. It’s sport, it’s business.

If, however, the real question is, should Saudi Arabia be allowed to host a big sports event? Well, that is for the governing bodies and their members to decide. The sports-washing label implies that we have all been conned, our memories wiped clean by a stash of ready cash. That is not true. It’s not brainwashing. The men and women fighting on Saturday are here for the money, they are professional athletes.

There has been a lot of boxing change, that is for sure and that will continue. The country has a health problem, that’s a fact. There are new boxing gyms in Saudi Arabia, women fight and two, including Olympian Ramla Ali, will fight on Saturday’s undercard. I know, that is all part of the government’s new plan and vision. It is easy to dismiss it, but it is happening.

On Saturday, Joshua has another loss to avenge and this time his opponent has most certainly not lost his way. Ruiz fell in love with food after beating Joshua. Oleksandr Usyk looks more impressive now than he did last September when he outpointed Joshua. They fight for three championship belts and Joshua will try to regain the heavyweight title for the third time. Since their fight, Usyk has been on the frontline in his country. He returned to Kiev when Russia invaded; that war delayed this fight and he saw things he will never forget.

Last September when they met in North London, the exotic was missing, but it was a fight of surprises. Usyk had it easy far too often and Joshua got so many rounds wrong that it was a shock. Usyk admitted a few weeks ago that it was a hard fight and that he had suffered in victory. His face was badly cut and bruised. It was not the simple boxing lesson that too many in our bitter game insist it was.

In defeat, Joshua changed trainers and he has since shared some of the confusion that he was hearing when he went back to the corner on the night. He left the ring defeated, his face smeared in blood and told Eddie Hearn, his promoter, that he wanted a rematch. The pair were deep in conversation on the way back to the dressing room, walking through thousands, the flashes from phones illuminating their retreat. Joshua was too passive; this is his redemption out here on the Red Sea. There is no room in boxing history for the story behind a loss, no time for a catalogue of errors. Nobody cares – he has to put it right once again in Saudi Arabia. And that should be the story.

Saturday’s fight means something here. A promotional film was shot in the market in Jeddah, the souk, with both boxers walking through a crowd of traders to a ring. It feels like the old Middle East, a spice market from two centuries ago; Saudi can do that, look ancient down one street and then on another street there is an advertisement for the mirror-marvel that is the Line. Trust me, I’m not using marvel lightly.

Joshua is in Saudi with a massively reduced team or entourage, or whatever you want to call the people who huddle at a champion’s ankles. He has a very different head on, an altogether different approach. A hardness, if you like. Usyk, well, he just looks unbeatable.

Meanwhile, the former world heavyweight champion, Tyson Fury, will enjoy the first week of his latest retirement reading and hearing daily about a fight against the winner. Fury has had a busy few weeks: Bob Arum had him in a fight with Joe Joyce at Wembley in October, Fury then demanded half a billion dollars to fight, then he said that he would fight Joshua for free, then he promised Del Boy Chisora a third fight and then he retired on his birthday last week. He has two weeks to decide if he wants to relinquish his precious WBC title. The clock is ticking. And we thought another heavyweight championship fight in Saudi was the carnival!

It’s hot here on the seafront in Jeddah, the Red Sea is pretty, off under the haze and there are bold posters of the two big boys in Saturday’s fight. Behind closed doors, at hotels like the Shangri-La, both Usyk and Joshua have retreated from the sweltering circus to plot their revenge or repeat once the midnight bell tolls on Saturday night. Then, there will just be a fight.

Covid self-isolation rules: Do you still need to isolate with Covid?