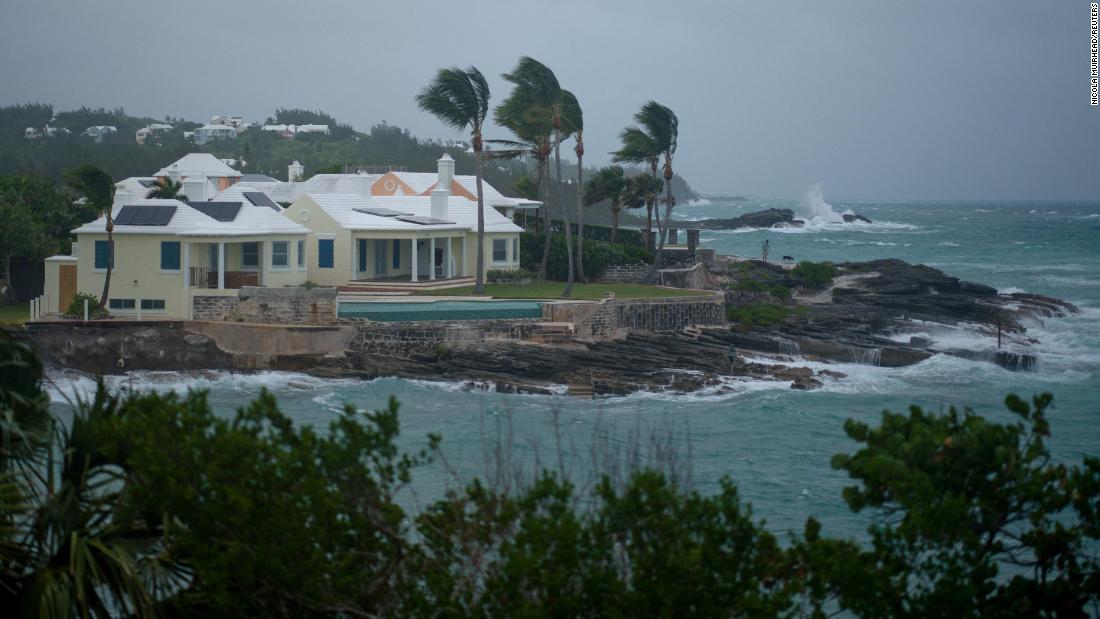 Here’s what else you need to know to Get Up to Speed and On with Your Day.

(You can get “5 Things You Need to Know Today” delivered to your inbox daily. Sign up here.)

Canadians are bracing for what could be the strongest storm to ever hit their country’s coast. Hurricane Fiona, which already battered the Caribbean, is now forecast to brush by Bermuda today before slamming into eastern Canada on Saturday morning. Residents in Nova Scotia and Prince Edward Island are being warned to prepare for Fiona’s impact. The Category 4 storm, which has already claimed the lives of at least five people and knocked out power for millions this week, will bring damaging winds, high waves and heavy rainfall that may lead to prolonged power outages, local officials said. Several schools, government offices and other businesses in the region have closed today in preparation for the storm.

Occupied parts of Ukraine are voting in “sham” referendums today on joining Russia. The referendums, which are illegal under international law, have been widely condemned by the West as illegitimate. Such a move could provide Moscow with a pretext to escalate its faltering invasion, which has seen Ukraine regain thousands of square miles of territory this month. The European Union has said it won’t recognize the results and has indicated it is preparing a new package of sanctions against Russia. Russian President Vladimir Putin, on the other hand, backed the referendums in a recent address to the nation. Separately, long lines of traffic were reported at several of Russia’s major land borders, as Russian citizens attempt to flee the newly announced “partial mobilization.”

A Democratic lawmaker in Florida is suing Republican Gov. Ron DeSantis to stop him from transporting more migrants from the southern border, arguing last week’s flights to Martha’s Vineyard violated state law. State Sen. Jason Pizzo, a Miami Democrat, says DeSantis illegally misspent taxpayer dollars by flying about 50 migrants from San Antonio to the Massachusetts island. DeSantis has vowed to transport more migrants from the border, and previously told reporters that the flights to Martha’s Vineyard were “just the beginning.” DeSantis said the action was paid for with $12 million that was allocated in the state budget, and he promised to use “every penny.”

More than $45 billion in pandemic unemployment benefits may have been fraudulently paid to criminals between March 2020 and April 2022, the US Department of Labor said in a memo on Thursday. This is the latest report to identify widespread schemes to steal money from a variety of federal relief programs after Congress enacted an expansion of the program to help Americans during the Covid-19 pandemic. It’s also a big jump from the $16 billion figure estimated in June 2021. Fraud skyrocketed when state unemployment agencies were overwhelmed with record numbers of claims and relaxed some requirements in an effort to get the money out the door quickly to those who had lost their jobs. Within five months, more than 57 million people filed claims for unemployment benefits.

Boeing has agreed to pay $200 million for misleading the public about the safety of its 737 Max plane following two fatal crashes in 2018 and 2019. The Securities and Exchange Commission alleges that, following an October 2018 crash of a Lion Air 737 Max jet that killed 189 people, Boeing and then-CEO Dennis Muilenburg knew that part of the plane’s flight control system posed an ongoing safety concern — yet told the public that it was safe to fly. After a March 2019 fatal 737 Max crash, the SEC alleges that Boeing and Muilenburg knowingly misled the public about “slips” and “gaps” in the certification process of that flight control system. Elsewhere in the aviation industry, American Airlines recently announced it will ban an unruly passenger for life after the individual punched a flight attendant.

The United States Space Force has a new theme song… but critics say the tune is so bland and boring it will make you space out.

Ime Udoka, head coach of the Boston Celtics, has been suspended after having a consensual relationship with a female member of the team’s staff.

Kanye West, who now goes by Ye, shared this message for his ex-wife on ABC’s “Good Morning America.”

Fetuses smile for carrots but grimace over kale, study suggests

A 4D image of a fetus shows a “cry-face” reaction after being exposed to kale, but a “laughter-face” in the womb when exposed to carrots. Check out the interesting — and relatable — pictures here.

After the death of Queen Elizabeth II, the UK went into national mourning. But emerging brands made sure the show went on, with many designers honoring the late monarch in creative ways.

According to the FAA, how many hours of flight experience are required before a pilot may work for an airline?

That’s how much FedEx will raise its ground and express shipping rates by next year, the company said Thursday. Freight rates will also increase by an average of 6.9% to 7.9%. FedEx said the weakening global economy, particularly in Asia and Europe, has hurt its business. The company is responding by reducing flights, trimming hours for its staff and closing 90 FedEx Office locations, as well as five corporate offices.

“Today the government of Nicaragua pulled our television signal, denying Nicaraguans news and information from our television network, which they have relied upon for 25 years.”

–CNN en Español, issuing a statement after the government of Nicaragua abruptly took CNNE off the air this week, shortly after 10 p.m. local time on Wednesday. In recent months, CNN en Español has reported on examples of repression by the country’s government under fifth-term President Daniel Ortega. While the government has not explained why it removed CNN’s Spanish-language service, the move comes as Ortega’s regime has sharply cracked down on the press and critics over the past two years.

Sidewalk drawings that will mess with your perception

This street art is made to look like its interacting with its surroundings! Some are so realistic you may need to stare for bit! (Click here to view)

Sturgeon: Super wealthy ‘laughing all the way to the bank’ after mini-budget

Is the pandemic over? We asked an economist, an education expert and a public health scholar their views