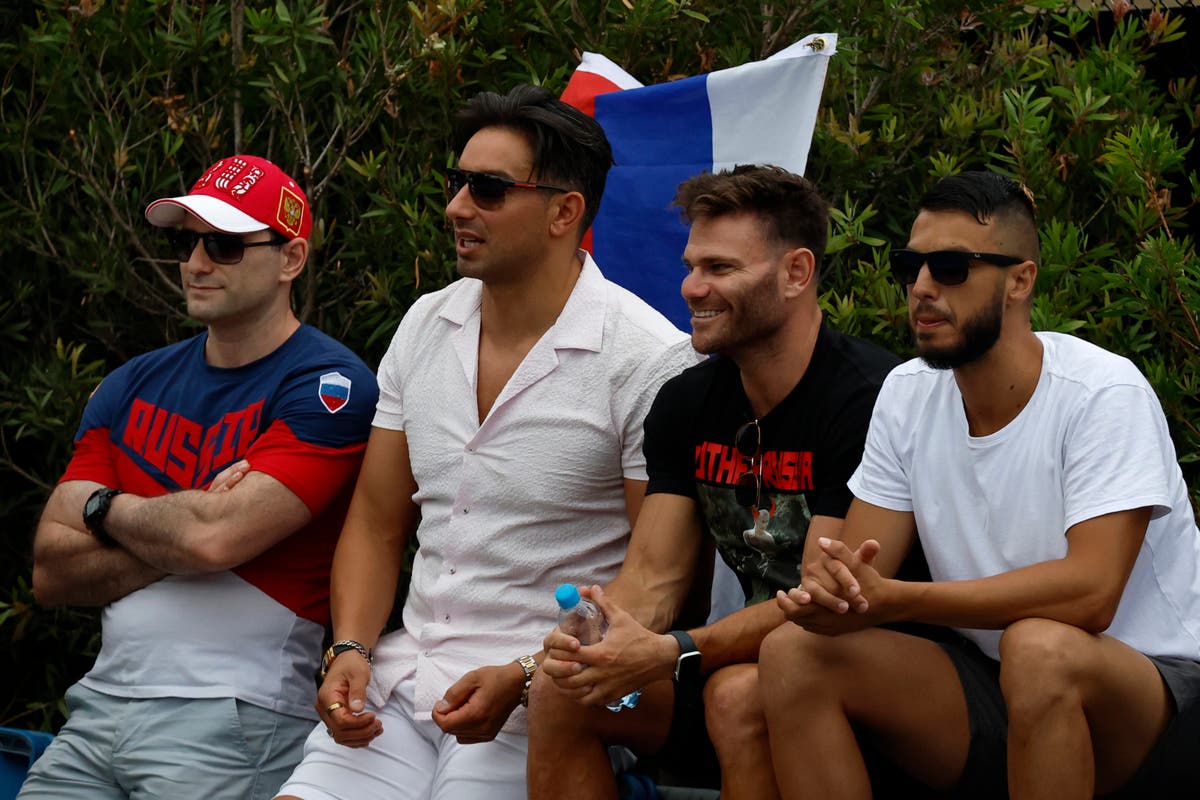 Four people were kicked out of the Australian Open after displaying Russian flags — which have been banned from Melbourne Park — and threatening security guards, police and Tennis Australia said Thursday.

A Victoria Police spokeswoman said the four have not been charged but were evicted from the site.

The flags, at least one of which included an image of Vladimir Putin, were being waved during a gathering outside of Rod Laver Arena after Novak Djokovic beat Russian player Andrey Rublev in straight sets in the quarterfinals of the year’s first Grand Slam tennis tournament Wednesday night.

“A small group of people displayed inappropriate flags and symbols and threatened security guards following a match on Wednesday night and were evicted. … Players and their teams have been briefed and reminded of the event policy regarding flags and symbols and to avoid any situation that has the potential to disrupt,” Tennis Australian said in a statement. “We continue to work closely with event security and law enforcement agencies.”

On Jan. 17, the second day of the Australian Open, flags from Russia and Belarus were banned from Melbourne Park after more than one was brought into the stands by spectators the day before.

Normally, flags can be displayed during matches at Melbourne Park. But Tennis Australia reversed that policy for the two countries involved in the invasion of Ukraine that began nearly a year ago, saying the flags were causing disruption.

Athletes from Russia and Belarus were barred last year from competing in various sports events, including the men’s World Cup in soccer and Wimbledon, the Billie Jean King Cup and Davis Cup in tennis, because of the war in Ukraine. Russia invaded, with help from Belarus, in February.

Russian and Belarusian players have been allowed to play at the Australian Open, French Open and U.S. Open, but as “neutral” athletes, so their nationalities are not acknowledged on any official schedules or results for the event and their countries’ flags are not displayed on TV graphics.

At the Australian Open, two women who represent Belarus — Victoria Azarenka and Aryna Sabalenka — and one man who represents Russia — Karen Khachanov — reached the singles semifinals.

On Wednesday, the International Olympic Committee said athletes should not be penalized for their nationality and made clear it wants Russians to be able to compete at the 2024 Paris Olympics as “neutral” athletes.